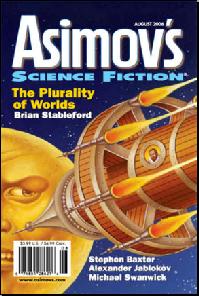 A welcome return to Asimovs, after almost 10 years, by an author who provided some top notch short SF in the late 80s/early 90s.

Jablokov takes what is now a well-established trope, and gives it just a bit of high quality buffing. Digital uploads are the trope in question – or, more specifically, When Uploads Go Wrong (hmmm, I wonder when we’ll see that on TV?).

There have been some fairly retro-takes on that topic, notably Robert J. Sawyer’s recent ‘Identity Theft, this is a much more contemporary take. The Dead Man of the title is the flesh and blood version left behind after an upload to a digital state. The digital version is not impressed that there is a flesh and blood alive, and sets a specialist to track him down.

Through an unfolding, non-linear narrative we find out about the upload process, the specialists own personal experience of uploads (his mother), and get to hear both the meat and non-meat version of the same man lay claims to their right to existence.

A short gentle tale, with just a touch of Taiwanese magic, to steer a woman in the IT business in a direction best for her

Stephen Baxter. In the Abyss of Time.

The reader should strap themselves in, as Baxter takes us, through the eyes of a journalist and maverick British inventor St. John Elstead, on a breathless tour of the far future of our galaxy. There isn’t much in the way of story, as it is the cosmic canvas on which Baxter creates his vision.

Slightly awkward story, in which a near-future, highly constrained office environment is the backdrop to one woman’s attempt to manage a standardised morality and behaviours across the workforce, with her own guilty secrets to hide. It’s not quite as subtle as you’d expect from Rusch, or from Asimovs.

A more straightforward SF story than we normally get from Swanwick – in fact, almost Analog-esque. But only almost!

A two-person team working on the very inhospitable surface of Venus have a very strained relationship – only the neural implants they have which constrain any acts or thoughts that would cause damage to Company property or each other prevent themselves from visiting physical violence upon each other. Or, more pertinently, prevent the man from using his hands on the woman, who has had him on the end of her sharp tongue for a long time.

When an accident puts his implant out of commission, all bets are off, and she has to pit her cunning against his capacity, and desire, to do her serious harm. Under the unforgiving sun, we learn more about the couple, with the extent of the bitchiness of the woman throwing the actions of the man into a better light. Can she talk her way out of this one?

Or, which makes the story work well, can she find some way out of the situation for them both? Unfortunately a maguffin appears, which saves the day, rather than her intrinsic cleverness, which slightly spoils the denoument.

Brian Stableford. The Plurality of Worlds.

A bit of a disappointment. The story has an interesting start, but rather meanders towards a so-so ending.

The setup is initially intriguing, with Stableford going a couple of centuries better than Victorian steampunk, to Elizabethan ruffpunk (codpiece punk?), in which messrs Raleigh, Drake and others ascend to the heavens in a wooden vessel, making claim to be the First Men in the Moon. There’s a sort-of Alternate History element, in that instead of being good Queen Bess on the throne it is in face Queen Jane, but this has no real bearing on how the story itself, other than having a different political backdrop to the story than would have been the case.

One in space, finding a breathable aether, the gentlemen explorers find themselves beset by a multitude of large-scale insect-types, and it transpires that the exo-skeleton is the galactic norm, and us humans are very much the exception. There is a deal of philosophical debate amongst the explorers, some dramatic incident, and then they are returned to Earth, to ponder their experiences (and dismiss them as a fantastical dream).

It’s the lengthiest story in the issue by far, but feels somewhat insubstantial.

Real physical versions of Asimovs are to hand, which I find I read much more quickly than the e-versions of late (having spent most days at work in front of a screen, reading off a screen is not much of a relaxation!) – so I expect to be up to date with the US mags by the end of the month!