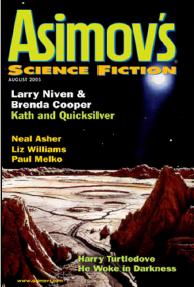 The planet Myrial is an intriguing setting, it’s indigenous Sheq (shit eating quadrapeds) living in groups of seven, a protected species. Rumour has it that the planet has also got a mysterious offworld Gabbleduck somewhere in the forests and canyons. The protagonist is hired by a wealthy brother and sister, and their PA, to do some sightseeing. However, the couple have other plans, and the siblings, having dispatched a group of sheq, have him and their PA in their sights.

She is certain the fire has been started by a serial arsonist, rather than a terrorist, and with her local knowledge and his hi-tech they are able to find their man.

The hi-tech plays a part, but not a major part, in the story, the main focus being on how each handles their near-death experiences (he by having short flashbacks), and there is some bitching about federal government politics and mismanagement (reading the story just after Hurricane Katrina makes this a timely observation!). However, as such the story doesn’t really go anywhere really sfnal.

Paul Melko. The Summer of the Seven.

Follows on from ‘Singletons in Love’ (‘Live Without a Net’ 2003) and ‘Strength Alone’ (Asimovs Dec 2004), in which groups of children are raised as ‘pods’, sharing communication through pheremones and other nonverbal means. Once again we meet Apollo Papadopolous, a sixfold pod, although the POV podmember is different to the previous story, which offers an intriguing opportunity (perhaps not exploited as much as it could have been in the story). The pod has their noses put out of joint by the arrival of a seven-person pod, Candice, who is very sure of her own importance.

Whilst both pods spend their summer raises ducklings for a science competition, it becomes clear that there is something wrong with Candice, and it transpires that the doctor who is responsible for her has been taking risks with her DNA in order to enable to her breed ‘true’. The contrast between the ethics of the children working on the ducks, and what it happening to them is perhaps a little unsubtle, and for me the story lacks that something necessary now that the novelty element of the pods has been passed. The ducky-wuckies don’t do it for me, and the fine detail of the experimentation was a bit of a bore – it came across as somewhat Analog-y.

Perhaps the age of the children is a hindrance, as the story is constrained by mid-teen concerns, whereas the first in the sequence had a more adult range of issues to address.

Far future in which our sun is gradually expanding, and Mercury is imminently about to be encompassed. The final evacuation shuttle is about to leave, but Kathlerian, despite have three decades under her belt, is stuck in teenhood, and behaves according to type, disobeying the ‘bot which is charged with looking after her, and going for a final spin on the planet. Things of course go wrong, and she is stranded, and has to draw deep on her own resources, those within the colony base, and the helpful, if intermittent, ancient AI which is very much part of Mercury. Between them they are able to find a solution which will at least deliver Kath to safety.

Niven and Cooper have contributed a number of joint stories to Asimovs/Analog in recent years which provide some solid SF adventures, typically helped above the average Analog story by featuring characters who are not bog-standard male scientists.

Harry Turtledove. He Woke in Darkness.

An Alternate History of the infamous Mississipi Burning incident in Neshoba County in 1964. Now then, I wonder if you can guess how an Alternate History angle might be applied to this civil rights/race murder? Yup, the south of the US of A, post-slavery, has ‘Negroes’ (Turtledove’s usage) very much in control, with the white population denied basic rights. Three civil rights workers from the North (two black, one white) have the fatal misfortunate to be pulled over by a black Deputy Sherrif, who delivers them into the hands of the equivalent of the KKK.

The story takes you through the final hours, and grotesque final minutes of the three, and I’m really not at all convinced that the story really has anything to say which is worthy of serving up such brutality in the name of fiction (the twist being that the white Deputy Sheriff Cecil Price, who died in 2001, is on the receiving end as the white man murdered by the black mob).

Liz Williams. A Shadow Over the Land.

A geologist assigned to a scientific team on Garhan finds that it has echoes of her childhood on the veldt, and that there is a strange force which some feel, and others do not. There is a suspicion of murderous intrigue, as a fellow scientist meets an untimely death after making a discovery, and she herself has a narrow escape. However, nothing can be proved, but she is able to return to the site of their studies to attempt to feel once more the presence which may have saved her.

The story rings true in that suspicions are left unresolved, rather than there being a dramatic unveiling of the murderer, and the setting and pace are just right, leaving the reader intrigued rather than fully sated.

A young man is struggling after the loss of his brother in a motorcycle accident, and finds that a humongous catfish in a big pond back at home might be able to offer him something in return for those few things left which he values. Whereas the Irish folktalke offers a Salmon of Knowledge which will give its knowledge to he who catches and eats it, the Catfish is perhaps a Catfish of ?Memory/Forgetting? and the young man is determined to consume that which it offers. However, as with Finegas in the Irish tale, things do not always go as planned.

A very assured Asimov’s debut, although more mainstream than genre.

The story starts gently, with a gnarled ranch-owner sitting on his porch after dinner, pondering his daughter’s imminent birth and his pink-skinned son-in-law. Very cleverly, we are led to assume that the young man is just less of a man’s-man than the old cowpoke would like, but a few pages in the story v-e-r-y cleverly steps up the pace when we realise that the son in law is not of this Earth.

We hear of the plight of fLaar and his race, how they fled their home planet when their sun threatened its very existence. Having spent millenia in space, the few thousands of his race have given up all their knowledge to humanity, and have asked to be invited to stay. The ranch owner’s daughter had offered such an invitation, and had indeed been very welcoming, and through her imminent childbirth we are given a glimpse of a shared future fur us and the alien race.

The intro states that Richerson has been laboring in the short story field for some time – well this story isn’t labored!