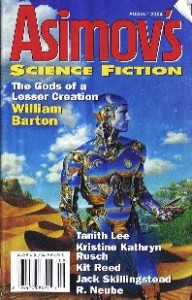 William Barton. The Gods of A Lesser Creation.

Barton returns to the setting of previous stories of his ‘Heart of Desire’ (Asimovs Jan 2000) and ‘The Engine of Desire’ (Asimovs Aug 2002), and explores similar themes of what it is to be human, through HLL-357 a genmod cyborg, half-human and half-god and half-mechanical (OK math was never my strong point). HLL-357 is a chattel, a servant, a -thing-. Except that it is clear that he is as human as the rest of us, and, in fact, has more humanity than some of those humans at the top of the evolutionary and economic and social tree. A strong story.

A slightly less assured exploration of similar themes. On a planet where the inhabitants are very, very alien to behold, a human has been incarcerated for war crimes. A visiting human doctor talks to her, and the reasons behind her actions, and those by which she went to war (breaking her brothers’ legs to stop them joining up) are explored. The doctor is perplexed at the treatment the aliens are giving to a murderess, and just in case the reader doesn’t spot the fact that the aliens are proving their ‘humanity’, the final line is the doctor saying “..if only they weren’t so damned alien“.

Lee paints a vivid picture of the emptiness of the moon, and the emptiness at the heart of those few scientists working in its bases. Stories about lunar beasts, half human/half wolf, are spreading, and Chrissie Bayley finds the call of the wild alluring…

Richard Parks. A Hint of Jasmine.

A story which doesn’t really go beyond its central conceit : in the future, to prevent war, children are sent back in time to observe the horrors of war. A man whose job it is to take back the children has put his job on the line due to breaking a cardinal rule – offering succour to a child almost catatonically freaked out by what she has seen. The story takes us through the visit in question, and the horrors which were seen, and the real question to me is why this kind of situation wouldn’t have occurred on a more regular basis, as you would have to have a heart of stone to put innocent children through such a process. Similar in some ways to the post-9/11 stories in which a variety of sfnal ways were proposed to confront the bombers with the true horror of their ways in the hope of changing them. I think Barton (above) has it right – there will always be a darkness at the heart of humanity.

The editorial intro does state that this story does form the middle part of a novel, which is something which can be OK in a magazine, provided that the story is able to stand up on its own. However, this story leaves the reader on a cliff-edge, with only the purchase of the book as a way of coming to a satisfactory conclusion. The story itself is an intriguing one, set on board a generation starship, but with one immortal on board, who is there by dint of being used as a live spare-parts machine for the billionaire owner. When the owner comes a-calling for a new eye, our hero makes a run for it.

Mamo Lota has been fooling her islanders for many years, claiming that she can speak to the Gods, and thus able to maintain her position as Guardian to the Weeping Gods. Occasional flotsam and jetsam washed up on the beach suggest that maybe they aren’t the only people on the planet, and that there may be other islands, but she is able to dismiss such suggestions. However, when a steamboat powers into their bay, the old ways are definitely on the way out.

When Dad is dead his girls clear out his house, the better to get rid of his evil presence. Unfortunately for them, whilst he is dead, Dad is very much on the scene, objecting every step of the way.

A long haul trucker is in the middle of nowhere in the solar system, and is mighty displeased when the authorities pay a visit to check his cargo is entirely kosher. However, he is grateful for the presence of company when their ships are hit by pirates, who are using cloaking technology to get close.

The trucker and his new companion have to be very clever to avoid the predations of the pirates, and are helped when realised that rather than cloaking themselves the pirates are hacking into their ship’s software to make them invisible.

A good issue, chock full of strong SF with a bit of horror/mystery/fantasy/speculative fiction thrown in for good measure.