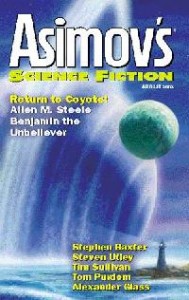 A classy short story, and more evidence to be grateful that Baxter has kept faith with the short story form where others have not.

The story reveals itself as addressing the Fermi Paradox, but only slowly. It starts big, and it gets bigger. In the first sentence we are told that Reid Malenfant has ‘poked a hole in the wall of reality’. Malenfant, is at the Jet Propulsion Laboratory, in front of an audience who are waiting for the returned echo of a laser pulse he fired at the planet Alpha-Centauri A-4 some eight years ago.

The tension builds, and then fades, as there is no echo. There is confusion, and all are perplexed, save for eccentric scientist Cornelius Taine.

Baxter gets his info-dumping into the story in an ingenious way, although slightly awkwardly – journalist Kate Manzoni communes with her alter-ego AI, and the discussions between them have more than a whiff of a hint of e-mail exchanges between Baxter and his old mate Arthur C Clarke.

Manzoni travels to meet Malenfant as more mysterious deep-space events are happening – we have lost contact with the Voyager probes, now outside of our system. And when the outer planets go missing, it would appear that Fermi has been answered : a much, much higher intelligence has had us under observation, and the effect of the laser pulse has been to totally bollix (my phrasing) the computer simulation in which we live.

The final scenes, in which the assembled family await the onrushing nothingness? are redolent of Clarke’s Childhood’s End, in which the adult humans are faced with the ultimate end.

Malenfant has appeared in at least one previous short (‘Saddlepoint : Roughneck’ which Dozois collected in his #16), and also in his Manifold:Time series of novels. I’ve not read the novels, so can’t comment on how this story fits in with the novels. Maybe I’ll have to read the novels!

A short, dark story in which civilians are huddling in a bomb-shelter in a near future America. Conflict and war have carried on unabated in the years to come, and yet the viewpoint character continues to play his wargames on his computer. Perhaps war has become too much like a computer programme, and with death no longer the length of apiece of sharpened steel away, war becomes that much easier.

Tim Sullivan. The Mouth of Hell.

A young man in Ancient Rome comes upon his inheritance and visits Rome. There he comes across an alien race sheltered in the depths of the mountains. Fine as far as it goes, but it doesn’t really go anywhere that we haven’t been many times before in SF/horror.

Alexander Glass. From the Corner of My Eye.

Glass has come to prominence via a small number of well-received stories in Interzone. I’ve certainly made a point of praising those stories, and Glass once again comes up with the goods. He takes some well-established tropes, Virtual Reality and AI down/uploads, and brings them together in a vivid and unique setting.

A Mediterranean sea-port is the setting. A drab place to the unaided eye, it is transformed by VR projections that can be picked up by the local populace, whose vision is enhanced to see said projections. Not only do the buildings wear a VR identity, but so do the people themselves.

In an effective scene the main character marvels at the way the setting sun plays on the lapping sea. But when he realises that it is ‘just’ Mother Nature, as opposed to a programming feat, he is scornful.

In this augmented visual world, the protagonist is surprised to see a woman who appears quite out of the ordinary. It transpires that she is evidently totally unaugmented, wherease others, whom the protagonist hunts, are Ghosts – totally non-corporeal downloaded personalities, who have no legal right to be on the streets.

For me there is more of a chill than you get with a Cyberpunk vision of the hi-tech future, as the society Glass describes is entirely vacuous and shallow, and my fear, Fermi Paradox-wise, is that intelligent life disappears up its own backside before it has the capability to reach the stars!

A strong story. You’ll be seeing it next year’s Dozois’ 21st , unless I’m very much mistaken.

Utley has produced a series of stories in the ‘Silurian Tales’ sequence in which a link has been made back to the Silurian age (either to our own time, or a quantum Earth, I can’t recall). They tend as a rule not to have a whole lot of plot, but are there two showcase an individual or a relationship. This is not different, as we see through the eyes of a young man who has a lowly job on the this-Earth side of the transportation equipment. A lowly job it has to be said, but the closest that he will ever get, and he, by rights, should not even be there.

A sensitive portrayal of human longing and frailty.

A further story in the second Coyote sequence. I made a point of reading the previous one, ‘The Mad Woman of Shuttlefield’, and remarked it wasn’t a whole lot different to an episode of Bonanza.

Here the sfnal elements are minimal at best, and when they do appear, superfluous.

A new group of colonists arrive on Coyote, but this time a group of robed religious types are a change from the norm. More so their charismatic leader, whose body has been modified to look like a devil. We don’t find out the reason why straight away, and his appearance on the landing ramp is reminiscent of the similarly demonic alien in Childhood’s End. And whilst his appearance may have dramatic impact, it really doesn’t have much impact on the rest of the story.

The story is essentially that of the group of disciples following the obviously bonkers Zoltan into the wilderness, taking their nightly turn in his tent for ‘meditation’. Ahem.

Madness rears its ugly ahead once again (previously Madwoman of Shuttleworth, and the Nebula-nomineed ‘The Days Between’ featured another character who sank into madness. Not only is Zoltan bonkers, but his demonic shape was the result of a mad scientist (no, really) who, in shades of Stephen King’s ‘Misery’, takes in the desperately wounded Zoltan and experimented on him.

The demonic body is somewhat of a hindrance. There is much more scope in looking into what it is that makes otherwise generally insignificant (mostly) men becoming demi-gods. And you know (we have been told in the first paras) that a Waco is going to happen.

Not only is there a lot of madness in Steele’s stories, there’s a lot of running away. The original story had the good guys running away from a repressive regime on Earth. One of the stories has a couple of youngsters running away. Once their initial settlement on Coyote was spoilt by the next ship from Earth, the original settlers run away to the wilderness. And in this story the religious group who have run away to spread their word on Coyote, having not had the warmest of welcomes from the second lot of settlers, run away to spread the word amongst the orginal settlers.

The story ends with the group evidently dying in the wilderness, having tried to stave off their fate with cannibalism. However, the bones of the demonic Zoltan were not found, and there have been strange sightings in the wood….. (doh!)

A shadowy post-human turns up and points the fleeing zealots in the right direction, and some characters from the early stories re-appear, but it just doesn’t hang together for me. It’s becoming a bit like an SFnal version of a fat fantasy trilogy.

And, whilst I’m not a prude, there were two erections in the story. Now there’s a time and a place for this kind of thing, but I don’t want erections rammed down my throat whilst reading Asimovs!

Maybe its me favouring fellow Brits, but Baxter and Glass are the pick of the bunch for me.