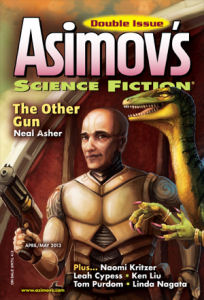 Neal Asher. The Other Gun.

Another fast-paced story in a sequence that has previously graced Asimovs (Softly Spoke the Gabbleduck, and The Gabble). Very fast-paced, but with plenty of invention in there, as the techno (at times almost technoporn) is described in loving detail, pretty much the only thing slowing the story down.

The Other Gun is a weapon hidden in the ‘body’ of the main character, who has lost a lot of his body, and some of his memory, and some of his humanity, the threat of the use of which part of the story thread hinges on. He’s in the employ of a bone-chilling entity, and has a Mesozoic raptor as a sidekick (see cover pic), and is chasing down some lost tech.

The Other Gun is eventually used (bit of an anti-climax really), and as the protagonist is missing quite a bit of his mind, and there are hints that other participants know more about what is happening than he does, it’s difficult to get engaged as you are on a hi-speed rollercoaster, and you know that there will be ups and downs, twists and turns, but you know you will end up safely at your destination.

Joel Richards. Writing in the Margins.

I read this a couple of weeks ago and didn’t really enjoy it, and coming back to ‘review’ it I skimmed through and found some dialogue that caused me to wince : “I know”, Tim said. “This palimpsest construct, metaphor, whatever it is. The basic self endures. In each life we can only scribe our overlay on the basic essence.”

Anyhoo, there’s some scientific stuff (helpfully explained in more dialog : “I graps the process: the synthesis through enzymatic catalysis of neuropeptide – a neurotransmitter, it turns out – that had once been a part of the human genome but had mutated out..”) and in a short space of time the issues are looked against a paralysed wife, a cold case rape and a Danish cop.

On an out of the way planet, a young man earns his keep by providing guided tours of the forest where, as a young boy, he was rescued by the titular Julian, when lost in the forest. The legend of this Earthman, living for decades amongst the indigenous creatures in the forests has earned him enough to get by and to keep his mother, confused in her old age. Trouble is, the rescue never happened, and when a film crew come to make a documentary, he has to go deep into the forest, and into his memory and ethics.

Good as far as it goes, but nothing particularly noteworthy when reading it, and nothing to stick in the memory much after reading it.

A chilling mystery has to be solved, as a number of scientist succumb to a strange death that it outside the boundaries of what should be possible. Some excellent characterisation and dialogue, just a bit different to the usual.

A follow up to Golva’s Ascent from March 2012, which I skimmed through. A ‘fast paced adventure’ of the kind that Purdom often produces that don’t really do it for me. But if you are wanting to read more about Harold the Human, here’s your chance…

Linda Nagata. Through Your Eyes.

In the near-future a young man with the very latest hi-tech corneal implants (Google Glasses being so old-fashioned), finds himself unwittingly getting in way above his head when a walk home finds himself in a protest march.

With a political regime that frowns (hard) on protest, he finds his hi-tech enhancement, and the capacity to record what it happening, give him the opportunity to make a testament against what is happening. And it boils down to a choice he has to make.

The POV is expertly handled by Nagata, making for an exciting, readable, believable story.

Bunker looks at the future gap between the haves and the have-nots, through one of the former, who is flying (unaided!) in a trans-continental race. When she crashes to earth and has to spend a night for the nano-repairs to take place, she gets a much more close-up view of the lives of people eking out a life at a subsistence level. No easy answers, just questions.

I’ve a soft spot for anything to do with the Berlin Wall, as it brings back very fond memories of watching the wall come down whilst in a maternity hospital room with my wife, with son #1 on the way, and thinking to ourselves that what with the Cold War clearly coming to an end, the baby was going to be born into a much safer world. Heigh-ho.

Kritzer provides a nice little time travel story, with a young woman initially reluctant to believe that the woman who occasionally plays her a visit is in fact her future self. As to why her visiting Berlin is so important – all of course is revealed. With a touch of the Time Traveler’s Wife in putting constraints around time travel, and focussing on relationships, it’s a story that works well.

A technology that allows instant transportation, enables a young woman to run away – far, far away – and for whole communities to leave Earth behind.

A technology enables individual to see with clarity an event that will happen to them in the future. In some cases the nature of that event can have huge impact, and a young man who has seen himself as a murderer, is visited by a young woman who knows her own fate as a murder victim.

A bit of a curate’s egg of an issue – good in parts, less so in others.