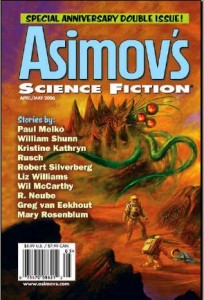 Part of a series of loosely linked storied set on the ‘Netherview’ space station. An earlier story of which, ‘Dance of the Yellow-Breasted Luddites’, was a Nebula nominee in 2001 (it was originally in Ellen Datlow’s ‘Vanishing Acts’ in 2000, and is available on Fictionwise). Prior to that ‘The Practical Ramifications of Interstellar Packet Loss’ appeared in Science Fiction Age during 1998 and was well-received, and that story is online, free of charge, at InfinityPlus

Shunn sets up an intriguing setting quickly and well, as we hear the doubts of 15-year old Jude, who shares a small room with his father in the claustrophobic Machinist Quarter of Netherview’s Station Ring B : “The Manual tells us that in the beginning the Builder decreed six fundamental Machines. These are his six aspects, and all we do we must do with the Six. We need no other machines.” Shunn is economical but extremely effective in showing how the beliefs of the Machinists structure their lives, education and behaviour, in a few pages building a believable and three-dimensional community.

Jude’s father has found him a job – outside the Quarter, as a stevedore at the docks at the Hub, and here his already wavering belief in those six fundamental machines (The Wheel, the Wedge, the Lever, the Plane, the Pulley, and the Screw) is further compromised amongst The Sculpted : humans with body modifications and beliefs diamaterically opposed to the utilitarian society in which he has been raised. His inner turmoil is heightened by his conversations with the blue-skinned Derek, the communal samesex showers after work, and a tipping point in reached when triple-pay is on offer (and his father needs the money) but minor Sculpting in order to work in vacuum is required.

And in considering this option, a conversation with one of the ship’s AIs, ‘Geoff’, puts Jude in possession of a lot of new knowledge, about the Machinists, his father, his mother, and ultimately, himself.

Short entertaining piece looking at a very uncertain schoolday, where chronarchy reigns. It reigns all day, and fitting in school and homelife is a chore.

James Maxey. The Final Flight of the Blue Bee.

The Stinger, youthful accomplice to the superhero Blue Bee, has just got out of jail after a long stretch for murder, having been caught fatally despatching a villain. He has a bone to pick with his erstwhile friend, who signally failed to rescue his junior partner during his 40 year detention, and uses a whore as a hostage to get the Blue Bee out of retirement and to affect his revenge.

Rather Analog-y story in which a hacker manages (rather too easily) to get into a powerful AI, his intention to destroy it and to stop it from interfering in human affairs. Following a lengthy discussion between the two, he believes he has succeeded, but (duh!) the AI has made offsite backups and so is able to return, more powerful. The moral/ethical debate isn’t a new one, nor the underlying principle, so overall a rather weak story.

Kristine Kathryn Rusch. Except the Music.

A classical musician realises that his muse has been closer than he had realised, in a story which I’m not entirely clear counts as anything remotely SF or F.

A somewhat more far future story than Silverberg’s contribution to Dozois’ recent anthology ‘One Million A.D.’. It tells, through the eyes of an omniscient observer, of a visit to Earth by Hanoz Prime of Prime. It is told in a leisurely, languid, detached and somewhat disinterest tone, which one the one hand works well technically for the story, but has the effect of instilling a torpid lassitide on the reader (well, it did on this one).

Liz Williams. The Age of Ice.

An intriguing fantasy story, that feels somewhat like an extract from a novel. The opening, in which a ‘flayed warrior’ appears before an undercover agent deep in enemy territory is an effective one, and we follow Hestia through capture, escape and ultimate success in her mission. However, whilst the background conflict and the politics behind it are described so well, or perhaps because of it, the story doesn’t quite grab as a discrete piece in its own right.

Kayle uses nano-tech to rent herself out as a vehicle for rich people to vicariously experience events without being there physically. At a remote wedding, Kayla finds herself fighting for her life with a handsome wedding guest, but begins to suspect that there is more than chance playing a part in events, as her employer hasn’t told her everything. She gets one over on her employer, destroying her memories to prevent them getting into her employer’s hands (or brain), but in doing so, damages here memories (and feelings) for her co-escapee.

Another very strong, readable story – a current day setting, but with magic – but not the cod wizard/Harry Potter magic, but an altogether darker, sleazier sort, in a Stephen Kingy way. The story builds to a dramatic, memorable crescendo when, against the odds, a young man is able to draw on unexpected reserves to defeat a very unpleasant head honcho. van Eekhout succeeds in pitching the reader into the story, which has a palpable sense of place and people.

R.Neube. Not Worth a Cent.

A dark view of the near future in which being old and on social security leads to ghetto-isation. Centenerian+ William Stewart is more than a feisty character, and is willing to go to great lengths to stand up for the rights of those whom society has turned its back on. Stewart goes on a mission with a newcomer, ex-billionaire Hiram Bigg, (this Mr Bigg is frequently referred to as an ex-billionaire, which grates a tad), which leads to some interplay between the two which isn’t quite my cup of tea.

Fantasy tail with a difference, in that the protagonist is a reptilian creature – but one of noble extraction. Held captive by bitter enemies, he manages to make his escape, leaving behind part of him in the process, but that being a physical part, whereas his morals are intact.

Paul Melko. The Walls of the Universe.

The story itself is a good one, with John, a young boy working on his parents farm, being confronted by a version of himself, who claims to be from a parallel universe. We know this to be trua, as the POV quickly switches to the other John, who is indeed quantum-Earth-hopping.

We find out that the farmboy John is in fact in quite a bit of danger, as the dimension hopping John doesn’t quite level with him about the realities of dimension hopping, and the fact that it is a one-way trip which is made every time. We follow the pair of John’s, as the farmboy John take on the dimension-hopping mantle, whilst the well-travelled John makes his life on the farm.