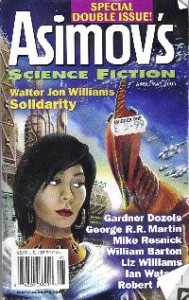 A sequel to ‘Margaux’ (Asimovs, May 2003) in which Gredel, a young woman living out a life which is brutal and likely to be short, finds a doppelganger who has been born with a silver spoon in her mouth. Gredel decides that she would make more of the opportunities which Lady Sula in squandering, and takes her place.

Here Gredel has very much taken the mantle with aplomb, and as Lady Sula uses her power and native cunning to bring around a rebellion against the aliens who rule her world (the story is set in Williams’ Praxis milieu).

The story is fine as far as it goes, but moves rather too smoothly through the action, with Gredel so much in the Lady Sula part that the fact she is someone masquerading in a role far different to that which she had in life is not a feature at all, leaving little connection with the previous story.

A farmer is concerned at the extent to which rats are successfully adapting to the traps which he has been setting to keep them away from his grain. Upon further investigation, he is extremely worried to find that they have in fact made some big evolutionary steps. Never mind Bears Discover Fire, these rats are armed and dangerous!

A short but effective piece in which a mother has to cross a very strange border in order to follow her daughter and to bring her back to normality – memorably, the border crossing involves dying and being spirited across into the other place.

Her journey mirrors that of immigrants from Mexico, giving up a lot to eke out a largely invisible life in what purports to be a better place.

William Barton. Dark of the Sun.

In last year’s equivalent issue, ‘Moments of Intertia’ provided a vivid portrayal of the end of the world, as darkness closed in on Earth, the sun’s energy being blotted out by forces unknown. The story of two couples holed up in a shelter awaiting the end was interspersed with the experiences of one of them after the event – a reincarnation amongst some friends and other contemporaries in a vast world which reincarnated other groupings from across time.

Here Barton provides an ‘interquel’, filling in some of the events during Earth’s final days, alluded to in the previous story. The dynamic between the two old friends, and their respective partners is a strong element to the story, as they endeavour to eke out the longest possible time before the rapidly declining conditions on Earth get to the point that life cannot be sustained. The women are slightly less well developed, their roles being that of a shrieking harridan and a supportive cook.

There have been several Alzheimer’s tales in the past couple of years, and Resnick cleverly takes this topic and melds it with the them of mental decline from Flowers for Algernon. Looking after his increasingly mentally frail wife, it is not a miracle cure which offers help for her elderly husband, but just the opposite – he chooses to follow her descent, so that Alzheimers can keep them together, rather than separate them.

A modern fantasy in which the King of California is a streetwise, self-tattooing dude who is protecting as best he can the weak and the oppressed (none of this silly mighty-thewed sword-wielding questing cod-piece wearing fantasy nonsense). He finds his kingdom threated – at first by the return of the Old King, his father, a necrous, syphilitic druggie. But the bigger threat is from his infant son, who the old man is wanting to take the throne.

The California King realises that change is the nature of things, especially in California in which the new invariably replaces the old without a backward look, but is able to turn the tables on the scheming eldster, calling on those who would otherwise be simply content to observe and not to take part.

Burt’s life was nice and simple – in a good relationship, although his coffee shop wasn’t doing much business. However, the arrival of The Harbringers changes all that, as humanity is offered Evolution and Change, which he finds more difficult to embrace than his girlfriend, Aimee.

She carves her way out of the rut and into a new path, and he has to come to terms with what is new before he can join her.

Reed goes back to his early days as a tyro writer, and puts an SFnal spin on events which happened to him – a road accident, and a tourist who can’t find his car in the car park, and wonders What if his scientist friend Dallas had found out that stranger forces were at work, forces protecting the fledgling race on Earth?

Mary is being cultural escort and tour guide following First Contact, taking the very strange alien who calls itself ‘Lover of Statues’ to see the greatest statues across the world, and the alien’s interest has been of an academic nature. That is, until they visit the bronze statue of Satan in Madrid, and, erm, the alien very much springs to life, memorably coupling with the statue which is miraculously adorned by a robus member, to better facilitate the contract.

Wil McCarthy. They Will Raise You in a Box.

A very short piece of literary writing, in which the interdependence of the creators and the created are viewed through the relationship between a created intelligence and those would have it do their bidding.

A very strong story which I enjoyed when I read it last year on SCI FICTION. Two questions immediately arise. Firstly, why is Asimovs running stories which have appeared in SCI FICTION? That is a very slippery slope – its one thing bringing to the attention of the SF reader stories which may have appeared in a small specialist journal or very small press magazine, but SCI FICTION is a) online and freely available b) actually in competition for the best stories with Asimovs.

Secondly, its a big no-no for Asimovs not to mention that this is a reprint.

Anyhow, the story features one tough hombre on a planet recently settled, the kind of Man’s Man that Lucius Shepard portrays so well. Hard drinking, hard living, womanising and fists at the ready. Whlist prospecting out in the wilderness, very much alone, he comes into contact with aliens who have been keeping a very low profile, for a very long time. He is attacked by them, and comes around in a very strange location – in a tank, evidently not breathing. He is eventually freed by the very strange aliens – the real alieness of the aliens being very well portrayed.

Not only does Ramon witness these very nonhuman creatures, throwing his own self into relief, but he also, to his horror, finds out that he is in effect a clone of the ‘real’ Ramon, who has fled the scene. The aliens can not allow Ramon to escape, as his bringing news of their existence will, in their mindset, end their existence. And so they have created a doppelganger Ramon, a clone with memories up to the point at which he was attached, to chase down the fleeing original.

There can of course only be one Ramon, and the new one wins out, and he is able to use his experience with the aliens, of seeing himself as part of a bigger picture, of going with the flow rather than against it, to shed his erstwhile sociopathic tendencies, and to in effect become truly human.

Eleven stories ranging from the excellent to the very good. Shame about the cover.