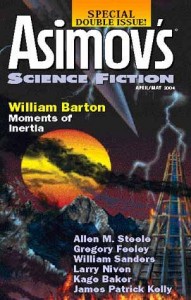 Barton is one name I look out for in Asimovs, as his stories invariably stand out. This is a particularly interesting story as in the intro we learn that after starting the story Barton has an initial diagnosis of a fatal disease, which turned out to be incorrect. Subsequently finishing the story, we are told that it came out differently to that originally intended. The first half of the story is a jumble of recollections as humanity is about to be wiped out by an energy force making its way through the universe at near-light speed, destroying all in its wake.

We are with the few remaining survivors on hand to watch the grand finale, staring skywards and trying to come to terms with everything simply ending. But, as Barton was in effect raised from the dead, so are our survivors, resurrected in a way not dissimilar to Philip Jose Farmer’s ‘Riverboat’ series. Those resurrecting do make an appearance, and those surviving are left to face an uncertain, if unlimited, future.

The story doesn’t quite hit the heights for me, with Barton perhaps being a little too close to the topic to give it full justice.

An alternate history piece-ette featuring Jack London and Lenin conspire to cause explosions at the turn of the 19th/20th Century. They are observed by far future observers. I’m not entirely sure as to what Sanders was trying to get across in the story, though.

Kage Baker. Leaving His Cares Behind Him.

A follow-up to ‘The Caravan from Troon’, which went down well in many quarters (although not in these quarters, it has to be said).

A young man of noble birth finds himself in an awkward position, and has to return to the familial home. His father, a fearsome cove, is not exactly pleased to see him and sets him a task. Young noble subsequently makes good on the task.

The task is not a million miles from that set by Monty Python’s fearsome Knights Who Say -Ni-, and for me the whole thing felt perilously close to a pastiche of cod-fantasy.

A very short piece in which an encounter between a dragon and a soldier-turned-farmer discloses Major Events Due to Happen.

Another in Steele’s ‘Coyote’ serialisation. I skimmed a lot of it, frequently blowing out my cheeks when reading some very routine action SF. But hey, there’s a heart-warming reunion/reconciliation at the end of the story. Like, duh, even I hadn’t spotted that coming!

In constrast, I would submit Reed as my idea of what a short SF story writer should be – someone producing a lot of stories notable for being a) generally excellent b) almost invariably new stories, rather than revisits to previous stories.

In this vignette a mansion on Mars is saved from dereliction by an AI which has quite major (and human) plans for its future.

Following nuclear devastation, part of New York is resettled by a motley assortment of individuals with little to lose, and we follow them as they begin to settle into the new environment and struggle to make themselves at home.

Tracker has been created by The City Man, and he is charged once again to bring back his master’s erstwhile lover. The blind man, aided by his seeing-eye dog, duly finds her, but finds more than he anticipated. Not only does he find love, but he finds the key to his identity and the means by which he can unshackle himself from The City Man despite their close relationship.

James Patrick Kelly. The Dark Side of Town.

A young woman finds that her husband has been spending their hard-earned savings on virtual sex. She is frustrated and annoyed and decides to follow him into his fantasy world. Once there, she realises that his escape from reality has been a sensible decision, and chooses to stay with him.

A very dense, and very lengthy novella, sprinkled rather too liberally with dialogue, italicisation of Italian words, Venetian names and name places. I think there’s something sfnal in there as I don’t believe steam power was developed at the time the story was set, but certainly not enough for me to invest the amount of time necessary to get to grips with what was going on.

A hefty double-issue with pretty much something to please everyone. For me Sanders, Baker, Niven and Steele give the issue a soft centre, flanked by stories very much more to my liking, with the Feeley novella giving the issue a somewhat leaden ending.