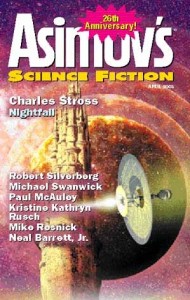 A list of authors on the front cover which promises a lot!

A further installment in the Mancx family saga. We rejoin Amber, the very model of a post-modern human, having escaped the Vingean singularity of a Solar System constrained future.

She ‘reawakens’ into a virtual environment, but not the one she was expecting. She evidently a long, long way from home, both in distance, and in time. Her theological advisor, Sadeq, in also in a very strange place – and he continues to meditate whilst ignoring his surroundings – a sensual babe-filled environment of the kind that Hugh Hefner would dream of when he feels a little jaded with life in his mansion.

Amber is told that she is a third of a million years in her future, and she has been resurrected by strange aliens to help them fight an encroaching menace.

But all is not as it seems, and a feline grin begins to appear, a la Cheshire Cat from Alice in Wonderland, and Amber, Sadeq and the rest of her companions have to wangle their way out of their current predicament.

Money remains the root of all evil, and the hi-tech future of these stories continues to entertain.

Paul McAuley. The Madness of Crowds.

A shorter story in which a scientist experimenting with pheromones finds chemicals which can provoke aggression and pacifity. The story doesn’t go beyond the brother of the scientist retelling the events of previous days, and perhaps the story could have gone further.

As one has come to expect from Barrett, a somewhat off-the-wall and entirely bodacious story. Dawkit’s life is about to change, as he is to get a special present. A very special present.

After a surgical addition to his body, Dawkit is now equipped for … lurve. Actually, let’s not mince words – he was one of the multidude of men without dicks. And now he has one. And boy, is he gonna use it.

However, Dawkit does find himself being led by his pecker, and he finds himself in a predicament.

A beautifully handled bitter-sweet story. Recently bereaved, the elderly husband of Anna finally views the many holographic videos taken of one afternoon in a restaurant many, many years ago.

Whilst time-travel is beyond us, it has proven possible to capture events of the past in sufficiently immersive detail for VR, and he is able to look back at his wife, before they met, and to finally come to terms with what he has lost.

A romp of an SF yarn, which could have been written completely straight for a chilling tale. However, for my money, the approach taken makes the story a better one for it. Eleanor Voigt’s job is a most peculiar one – she has to sit and watch a closed door all day long.

But there is one condition – she must never open the door.

Yup, you guessed it. She opens the door, and finds herself into a horrible, mechanised far-future with humanity evidently reduced to dull slavery. However, she meets up with a younger girl, from her future, and the pair find themselves playing a key, heroic role that will help save humanity from the terrors of the future.

Another shorter story, in which Resnick takes a second look at ‘The Maltese Falcon’. Now if I had a memory that could recall the plot from when I watched it about 25 years ago I could comment on the story!

Robert Silverberg. The Reign of Terror.

Another in the ‘Roma Eterna’ alternate history series, although I remain to be convinced that they aren’t simply straightforward historical fiction. It doesn’t look to me much more than a half hour’s work for someone who knows their Roman History to turn it into a story which could have taken place in the Roman Empire which did happen.

With the exception of the Silverberg and Resnick stories, the real SF in this issue is of the highest order, and I reckon on seeing two of them in next year’s Dozois Annual Collection. Bravo Asimovs!