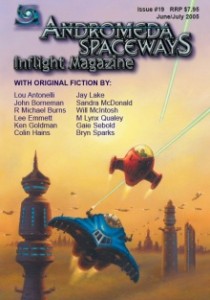 The origin of BestSF.net was my reading of various annual Year’s Best anthologies, and the database I setup in the early 90s to help me remember details of the increasing number of stories I was reading.

It was only some years later, during 2000, that I finally started reading the main SF magazines – Asimovs, F&SF, Analog and Interzone. What with SCI FICTION and Postscripts I believe this gives me a good handle on reading most of the best short SF published in magazine format in each year, with anthologists Dozois/Hartwell/Haber serving up those stories which appear in original anthologies in book form.

I did read a few issues of some of the smaller press titles a year or two back – reviewing them in the shape of Challenging Destiny (#17) and On Spec (#44, #45, #46 and #55). However other issues have gone by with my only flicking through them, and feeling fairly secure that I’m not missing the ‘best’ in short SF through not reading them. I also found that reading several (often up to a dozen) stories of just a few pages each (as mostly is the case with small press mags) doesn’t really fill me up – like a buffet lunch with only tiny little hors d’ouevres to eat.

There’s always a frisson of guilt though, as new writers have to learn their trade somewhere, and I do feel I should be supporting them in some way. Offered a couple of review copies of Australian magazine ‘Andromeda Spaceways Inflight Magazine’ it seemed churlish to refuse, so I duly took Issue #19 on my daily commute with me.

The magazine is digest-sized, and does have a higher quality cover than is often the case with smaller magazines. A couple of names on the cover ring bells (Antonelli, Lake, McIntosh) as they have appeared in some of the aforementioned bigger circulation mags.

An even dozen stories are squeezed into the issue :

Lou Antonelli. The Cast Iron Dybbuk : a touch of Quatermass and the Pit, as a long buried burial chamber is opened and an ancient horror is revealed. The story is ok without being really outstanding, and I did grimace a bit with a slightly clumsy opening couple of sentences which has one too many usages of ‘on the radio’ to read smoothly (‘Henderson mashed the button on his radio. As he did, he looked over to see whose channel had lit up on the radio.’) I’d have edited out the last three words!

John Borneman. A Melody of Brass. : a couple of perspectives are utilised in this story, which features a brass robot, an old man and his young grandson. Old Papa Bepe recalls his youth, and his role, and that of his robot companion, in restoring some of the lost beauty to the Earth. Probably the longest story in this issue, and to my mind the best in the issue, although several decades of oppression of music being swept away through the elders listening to a young boy with a flute felt a little too easy.

Gaie Sebold. A Pleasing Shape. : A tale in which the Prince of Darkness assumes a feline shape to get the better of a gallingly nice man. Cutesy, but not really my cup of tea.

Ken Goldman. And if Thine Eye Offend Thee. : Three perspectives in four pages, as a young boy bemoans the sad loss of Petey, who is being buried in the garden. Of course, the reader’s initial assumption about Petey is proven to be false. There’s some interest in exactly what Petery is/was, but otherwise fairly by the numbers for this kind of horror story.

Jay Lake. Many-Splendored. : An alien presence causes a welcome tumescence, as whitetrash Lewis will do anything for his -erm- lover, even bringing along his (unconscious) mate Bobby to feed her. (Not to feed her desires, just to feed her). Very much in the Howard Waldrop/Neal Barrett Jr. mould, just the kind of black humour which I like.

R. Michael Burns. The Big Cheat. : A near-future hi-tech ‘tec is on the trail of a cheating husband. Turns out the husband has used DNA from his wife to have produced a clone – a younger version of her, for thoroughly illegal (and immoral) reasons. Slightly longer thansome of the stories, although not really going anywhere that hasn’t been gone before quite regularly.

Will McIntosh. Under the Boardwalk. : Teen romance, but times have moved on since the halcyon days of the 60s, and not only is their HIV/chlamydia and a host of other nasties waiting for those who have amorous encounters under the boardwork, there is an even more insidious virus which those who have it are more than happy to pass on. For me a story idea that you I’d ideally want developed just a bit more.

Byrn Sparks. Bourbon and Blood. : Another detective story, in which the gumshoe is of a virtual nature, (coded straight out of Hollywood 40s movies), who is able to get the guy he is after. A neat twist in the tale.

Sandra McDonald. Papa and the Sea. : Hemingway is re-incarnated/re-constructed by beings who wish him to write. He finds out the whys and wherefores (up to a point).

Lee Emmett. Soo Lin and the Snow Eagle. : A tale of oriental yore in which true love magically finds it way. There has been a few stories of this nature in Postscripts of late, and I really don’t go for them.

M Lynx Qualey. Thrill. : a single pager in which two young children continue to play on the railway tracks.

Colin Hains. The Loneliest Place to Die. : an astronaut on the Moon is faced with a lonely death, unless he can suss out a clever way out of the problem he is facing. Can he do it? You betcha. Very Analog-y, although the obvious contrast for me is the comparison with William Barton’s ‘The Harvest Man’ in Asimovs Sept 2005, which covered the same ground to much better effect.

Editorial content includes an interview of Lee and Lyn Battersby by Martin Livings, and a ‘relaxed’ interview by Dirk Flinthart with Ellen Datlow. This latter is particularly worthy of note, as Flinthart (gently) chides Datlow for promoting the US as ‘the’ SF market which SF writers should be aiming to sell, and asking “are we supposed to market ourselves as ‘second best’?”.

This issue provided the same reading experience for me as the other small press magazines as mentioned at the top of the page – nothing really substantial into which to get my teeth. Is this because they don’t have longer stories submitted (novice writers not comfortable at longer lengths)? If your preference is for a lighter read, then ASIM fits the bill. Also, ASIM is able, with a dozen stories, to get a good range of mix of SF, horror and speculative (not much codpiece fantasy), which will appeal if you want a wide selection of bang for your ozzie buck. For me, I’m much happier with a weighty Dozois on my lap. (The Dozis book, dufus, not the dude!)

The issue didn’t really match up to the claims on the ASIM website promoting light-hearted and humourous SF as being their forte, as by my reckoning there were only 2 of the 12 stories which fit that description.

As mentioned above, the question posed to Ellen Datlow was whether ASIM should market itself as ‘Second Best’. Truth be told, none of the stories are anywhere close to being a ‘Year’s Best’, which is the gold standard by which I measure (this is BestSF.net and not GoodSF.net). Whilst you would never recommend ‘we’re second best’ as a marketing strategy, the reality is that the stories are second best (on the aforementioned gold standard), (and some don’t really attain that status). For small press mags the secret is going to be to get a distinctive niche, whether it’s a national one (the best Australian speculative fiction magazine), or a specific slant (humorous, short short stories, type of story, house magazine for wannabe writers).

Otherwise it’s a strict business case of being able to pay higher rates to attract bigger name authors to sell more copies, as authors will go for the highest-paying source in which they feel they have a chance of placing their story. In the wonderful age of the Internet, with Adobe Acrobat, Paypal, and email, the fact that a magazine is from Australia shouldn’t make any difference. You can reach your market quite easily, make available sample stories and issues, sell individuals PDFs and just generally overcome any obstacles that existed even just five years ago. Go for it ASIM, there’s a global market out there…..