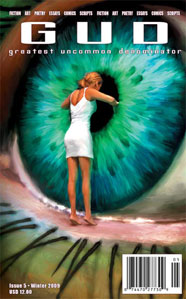 A second story in in this issue of greater length than you often get in small press magazine, and also SF rather than contemporary speculative. Tisbert draws on some contemporary issues, such as the obsession with celebrity, in looking at the lengths workers will go to secure employment (essentially uploading their personalities before a day’s work, in order to be able to concentrate better, drone-like, during the working day). Tisbert attempts a lot in the story, by going for three perspectives – the worker who is willing to take a huge gamble to impress his son, the company psychiatrist who is trying to keep the worker on track, and the rock star visiting Ceres. The worker risks all to attempt to steal the uploaded personality of the rock’s star’s uncle. Perhaps trying to squeeze three perspectives was asking a bit too much of himself, but the substantial length of the story, and of course its sfnal basis, gives more satisfaction to this reader than tends to be the case with the smaller press mags.