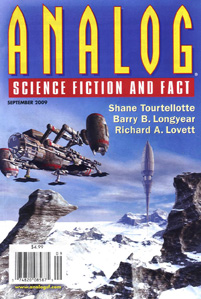 Tourtellotte looks at the implications of parents genetically modifying their offspring in utero to have their physical development halt at the pre-teen stage. Andrew Crawford is nearing 30, but living in a child’s body. He’s employed as a webmaster, and we get to see straight away some of the reactions of his office colleagues to him. Andrew has a chip on his shoulder, and isn’t the most likeable protagonist, and we follow him in his relationship with a fellow ‘frozen’, a young woman of the same age as him, but who appears happy to remain in a childlike relationship with her overprotective parents.

There’s a lot of dialog to get through, with lengthy conversations between Andrew and Alice, and Andrew and a close friend of his. Alice is helpful to Tourtellotte in providing an opportunity to infodump, willingly letting Andrew explains stuff to her (for the reader’s benefit) that she should know. But to give Tourtellotte his due, even if he tells it rather than shows it, he does explore a lot of the issues such a development could raise.

The relationship doesn’t run smoothly, with an assualt on Alice helpfully providing a climax to the story.

Marie DesJardin. From the Ground Up.

Short piece in which a young woman frustrated at the lack of political will for space exploration returns to her childhood home and is fortunate enough to find evidence of the miniature alien crash-landing that she had witnessed as a child but had not acted up, and is thus able to absolve her earlier inaction whilst simultaneously providing the world with a reason to reinvigorate our desire to reach for the stars. Apologies for the previous lengthy sentence, but it pretty much covers the entire story.

Short piece in which a small spaceship orbiting the Moon finds itself on course to hit the moon, courtesy of sabotage. There appears to be no way to make the ship change course.

Head-scratching ensues as varies ideas are hatched and discounted, including some courtesy of an SF reader who is able to recall stories he had read with similar conundrums (probably an Analog reader). Can those on board come up with a bit of lateral thinking to save the day?

An eco-science thriller. Environmental issues are explored through events triggered by some eco-activists/terrorists, who find that their actions have far, far serious consequences than they had intended.

The extent to which it is morally acceptable to take direct action is explored, as it the extent to which it is possible to work ‘within the system’ without compromising your ethical standing. On the side of the authorities, Helki and Victor are investigating the proposed site of a ski resort. They’re exploring the snake population on the banks of a lake, who are emergring from ‘brumation’, giving Victor a bad case of ‘ophidiphobia’ (Nevala-Lee knows some snake-related terms and ain’t afraid of using them).

There is a scientific conundrum to be worked out – how could a small amount of explosive cause such a massive explosion, and kill so many animals and humans virtually instantly? (I’m guessing msot Analog readers will be straight on the case – heaven knows I’m not a science geek and I had a good idea). The conclusion revolves around whether one of the activists (somewhat unbelievably unmoved by becoming, in effect, a mass murder), is willing to be persuaded from repeating the dramatic events on a larger scale in favour of less direct action.

Barry B. Longyear. Turning the Grain.

A lot of pause for thought for the reader in providing ethical considerations across a wide range of issues relevant to us now.