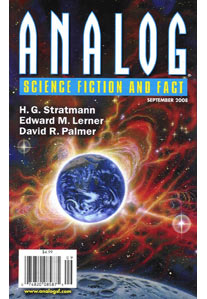 A sequel to ‘The Paradise Project’ (Analog Nov 2007) which I noted was ‘very much Golden Age SF in its telling and characterisation … some charmingly old-fashioned morals’. And sure enough we are re-introduced to Katerina standing with her freshly shampooed hair blowing in the breeze, to have her man come up behind her and wrap her in his hairy arms.

They are on a freshly terraformed Mars, moved closer to the sun by aliens who are wanting to sell the new real estate to humanity. Rather than a subtle exploration of how primitive superstition survives in the face of advanced alien intelligence, the crux of the story is whether Katerina’s faith can withstand the temptation of godhood that the aliens are willing, nay insistent, on bestowing on her.

It’s altogether too creaky, with the pair mentioning in passing conversation key information, with discussions over her faith with her partner that are as subtle as being hit with a brick over the head. Stratmann is clearly aiming for a certain demographic, with a reference which only those in their late 40s or older will catch (it’s to ‘The Beverly Hillbillies’).

William Gleason. Once in a Blue Moon.

Brody Bridges (is it just me, or do alliterative names get other people’s hackles raised) studied ornithology at college, which is handy when his exploration of the planes between reality puts him in an avian situation through which he is able to release the bonds (blindness) of his ‘real’ existence, to do good deeds for humanity in a virtual environment. There’s some info-dumping that raises a smile in the chutzpah of Gleason in making no attempt to hide it : a scientist asks Brody if he knows anything about synth-mass and synth-space, and when he replies in the negative the scientist gets straight in with some heavy scientific description : “Okay. Layman explanation for jocks. Just like synth-mass is manipulation of ZPE…” (scientist is Russkian scientist, meanings for reason for curious speech pattern).

Woken from her sleep, Noelle is informed that humanity is at an end, and that Earth is about to be wiped out. The alien voice in her head explains : ‘A black hole with the resting mass of your moon is headed toward your planet at very nearly the speed of light. Such phenomena are rare and dangerous. When it hits, your planet will simultaneously explode and ignite’. She has a few minutes to decide what few possessions she will take with her, and we follow her thoughts as he runs thorugh the options.

A short story during which young Jimmy gets his Adviser implanted, as all children do, and he finds that he doesn’t like having this voice in his ear tutoring him about how to behave and respect his elders, but within a few days he bumps into this guy fleeing the men in black and the guy slips this piece of equipment into his pocket and it helps Jimmy to not only turn off the adviser but also to hear what other advisers are saying to the grownups and he realises that it’s all a big conspiracy but he is contacted by the resistance and recruited to help humanity defeat these insidious advisers. Phew!

As with the previous story a quick whizz through a plot that could have been stretched to novel length. Intriguingly, Goldman starts with the planet Nieuw Vlaanderen, a Flemish outpost. Can’t say that I recall a Flemish space community before. After the collapse of the human empire in space, this planet is resisting the attempts of the Affiliated Planets to reduce the planet’s population to zero thorugh viral means, and Surgeon-at-Arms Roald Vik is despatched to sort things out. He ends up at a recognisably Belgian bar, sipping a witbier (no mention of whether the Belgian penchant for paedophilia has crossed the centuries).

Vik is immediately captured and put under observation, and the tables are in fact turned as the scientists are able to return him to humanity carrying a little viral package of his own that is going to help Nieuw Vlaanderen remain hidden.

The ‘story so far’, as is oft the case, is delightfully entertaining, to level of almost pastiche (‘The first person she met during her travels was ‘Adam’, a thirteen-year old hominem boy (actually named Melville Winchester Higginbotham Grosvenor Penobscot-Jones IV, by his parents, who died in the holocaust’.

A particularly creaky issue with fiction better suited to a semiprozine than an august magazine whose pages have been graced in the past by many masters of SF.