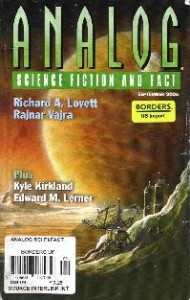 Richard A. Lovett. A Pound of Flesh.

The title refers to Shakespeare’s Shylock, who lent money on the basis that could extract said charge when the loan was defaulted upon. Whilst Lovett updates this principal to a nano-tech equivalent, his protagonist uses some archaic language – how long is it since some has exclaimed “Gad!”, and whose foullest language would appear to be “Damn her!”? I know that the Analog readership may be old – the letters invariably start with ‘Sir, I have been reading Analog since 1932…’ – but not that old, surely.

The updating involves a scary legal/nano combo, in which contracts are enforced by nanobots who unleash an instant and invariably unpleasant retribution when a breach of said contract takes place.

Alexander Copley, is a Private Investigator – I don’t really need to refer to him as ‘down-on-his-luck Private Investigator’, as that appears to go with the territory. He is facing nano-nastiness due to falling behind on his rent. His problems seem to be answered when a client (do I need to say that the client is a glamorous dame?) walks into his office and puts him on a big retainer.

The woman infects him with a truth nano, which causes him to flush when telling a lie, and this is the crux of the tale, as the inventor of this nano has run away with the antidote, and his partner (business and pleasure) want him found the antidote back. Copley takes the job and we follow his hi-tech sleuthing as he tracks the inventor down to his gold-panning wilderness hideout. One neat element of the story is Copley’s use of the truth drug on his soon-to-be-ex-wife, in which he finds out the truth about why she left him, and that truth hurts, as is it primarily to do with his failings.

Having found the inventor (bit of dramatic canoeing en route), the dame draws a gun and in a rapid denouement all is revealed, and resolved through the death of one party. (I won’t say who the party is, but suffice to mention it could head into Brokeback Mountain territory).

If you transposed the nanotech delivery into a truth serum, then you’d have a story that could have been written pretty much anytime over the last forty years.

A rather creaky story to put across a current moral. A crashlanded spaceship, several generations into eking out a living on a remote, inhospitable planet, is ruled by men who maintain the roles of Ship’s Officers, with the recent an underclass of menial servants. The original Captain is worships as a deity, and the word of the Survival Manual is legion.

When another ship finally arrives, it screw is horrified to see what has happened – but there’s no suspense or intrigue, as the POV character is one of the underlass, and all is explained -very clearly- for the reader, with no conceptual breakthrough, a proud SFnal conceit, attempted.

The officers are left behind to ponder ‘anyone who believes in a powerful divinity who rules them perhaps shouldn’t go around making decisions for that divinity, such as who is worthy and who is not’.

A bit of a head-scratcher, as it appears to be half a dozen bits and peices thrown together, to no great effect. An alien robot, mostly humanoid, is found on the moon, and has been under the study of the army and other government agencies for 30 years. Having failed to make even a scratch on it, or to gather any knowledge about it, the robot it let loose on Earth (duh- like that is anywhere near remotely likely!).

The sense of wonder in Arthur C Clarke’s ‘The Sentinel’ is a million miles away from this story, which stars with the robot’s ‘noggin’ falling off in the street. Now, ‘Gads’, as mentioned above, is bad enough – but ‘noggin’?????

There are a couple of supporting cast, a short sidestory about an estranged father/daughter, musings on religion, food bars and traffic jams.

The robot finally remembers his task, and ends up back on the moon, but it’s all a bit 1950s in feel. There’s maybe a seed of an idea here, that should have been nurtured and grown to maturity, rather than the weak seedling put on display too early.

Concluding installment of a serial. Notable at a quick glance, probably due to being sensitised by ‘Gads’ and ‘noggin’ to someone ‘falling afoul of..’. Falling afoul of? Is that in common usage in the States? Zounds, how it grates upon this British reader!

The three stories this month are particularly noteable for a very conservative feel to them.