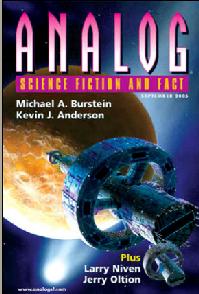 A Catholic Priest is giving a mass to those on a multi-species space station who are part of his flock. An alien begs for sanctuary in the ‘church’, claiming persecution. Some tricky dilemmas are posed, as the nature of the alien – criminal, heretic or persecuted – is open to interpretation, which echo interpretations which his church has faced over the centuries.

What with the instantaneous translator, there is very little alien about the alien, and she could just have easily have been a young peasant girl who is with child out of wedlock and bringing shame on her family – so you can almost see the story as a 1940s black and white movie with Spencer Tracey as the priest and Katherine Hepburn as the pregnant alien girl and you have the story – lots of chatting, virtually no action.

Potential ethical and moral dilemmas over what we as humans see as being right and wrong, and how our relationships with other species with different views is a topic sadly not attempted that often in SF (being much easier to write a xeno-linguistic story in which the trick to resolve is purely a linguistic one). Burstein tackles these issues along with a further layer of complexity added by religion, although for my money the anachronistic el

Private Eye Aman Bourton has a Fed turn up, who wants him to trace the whereabouts of a young man who has gone below the radar of the otherwise all-seeing RFIDscape. The young man, the same age as Aman’s son, has followed the same route as his son – getting his chip removed and joining the Gaiist movement, those fighting the technological advance for the sake of mother Earth, Gaia.

However, whilst the young guy believes he is now operating incognito, it is only a matter of minutes before the data warehouses accessible to Aman’s ‘Search Engine Inc’ are hot on his trail – for even a vegan paying with cash leaves a trail. Soon Aman is confronting the young guy, but it turns out that Aman’s office assistant has an interest in the case, and a shootout ensures. Aman is injured, but decides enough is enough and joins the Gaist cell, led by… (can you guess who?)

An interesting setup, although the plot fits together just a bit too neatly.

There is a race on to win a prize to get the first Space Elevator operating, and Grant Sullivan is losing it. However, his sense of schadenfreude at the collapse of his nearest rivals, who were ahead of him in ther race, is tempered with the fact that rather than being a technical Tahoma Bridge type problem, the disaster befalling his rivals was due to sabotage.

He is up against Gaia Jihad, who will use all means to thwart the success of his operation. One step is to get the work on his Space Elevator stalled, which they succeed in doing so. However, having been stalled for a while, someone comes up with the bright idea of having the Earth base of the elevator tethered in the ocean (like, several teams of scientists working on a space elevator wouldn’t have thought of that?). A further crease is added when blimp technology planned for Mars is put forward as a better base than an oil rig type construction.

However, the Gaiaists will stop at nothing, attacking the blimps in a warplane (piloted by someone who calls them ‘capitalists’ and who is refuses to let them complete their ‘blasphemous abomination’).

Similar in some respects to some of Arthur C Clarke’s short stories, in having a story which serves to do little more than to explain some science and criticise the anti-science brigade.

Lawrence M Schoen. Take Me to Your Liederkranz.

Mercifully short story in which aliens who are attempting to communicate via a young girl are helped to finally get their message across thanks to a pizza.

Carl Frederick. The Speed of Understanding.

On Rau’s Planet a very strange symbiotic relationship between the canine-like canoids, and the dominant aquatic species finally comes to light, thanks to a young scientist (now there’s a surprise).

A couple of scientists in orbit on a spaceship which is intended to be the first to visit, are appalled to hear that the mission is to be aborted. Seething in frustration they explore several options which may lead to them getting to Mars. However, the equations don’t stack up, except one that will allow them to have an impact on Mars.

Whilst they don’t live to see it, the seeds they send on a one-way mission to Mars do their job, and begin the long, slow process of greening Mars. However, subsequent generations of humanity are no better than us at curbing their self-destructive impulses, and Mars is turned back to the inhospitable lump it was before their long-term intervention.

Downbeat, but a story better than the usual Analog fayre.

Grey Rollins. Give Up the Ghost.

Hmm. Did someone mention ‘usual Analog fayre’? Rollins has a reasonably interesting story – settlers on a planet becoming very unsettled by the indiginous lifeforms ability to reflect back at them images of their lost loved ones. However, it was spoilt for me by the ploy of having the settlement populated by settlers speaking and acting in colonial British style. Not quite ‘What ho, chaps’ but near enough to grate, especially on top of a relatively routine telling of the tale.

An attorney is able to get his client off a murder rap which came as a result of his going back in time to murder the forebear of the man who would cause his parents to split up. (A retelling of the hoary old chestnut of what would happen if you went back in time and killed your own grandfather).

If you like the regular Analog fayre then you won’t be disappointed. Myself, Oltion is the pick, with Burstein/Rosenblum being slightly above the run of the usual mill.