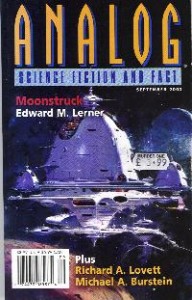 Part One of Four. A serialized novel. Lerner’s ‘Dangling Conversations’ stories had First Contact being made by radio transmission, with trading in knowledge between species being the only contact. Here he has a more traditional First contact, with aliens arriving on Earth.

I won’t be reading the story and thus won’t be reviewing it, as I don’t as a rule read/review serializations. Two things to note : the opening scene in which a Space Shuttle crashes was sadly prescient (the story was written pre-Columbia), and also Lerner’s use of a character straight from Analog central casting : a Russian who is going to have to struggle throughout the story to get beyond the initial stereotype (he is called Sergei and despite being an obviously bright chap, still says da and nyet when speaking English.

Michael A. Burstein. Paying it Forward.

A gentle homage to departed SF writers, in particular, Charles Sheffield, who appears in the guise of recently deceased author Carl Lamclear, who, like Sheffield, has a website designed like a spaceship cockpit.

The conceit: a budding author writes an email to the recently deceased author, just by way of putting his gratitude down in words. When a reply comes back, purporting to be from Lambclear, the tryo author is confused, and angry. Presumably someone is using his email address and masquerading?

In fact, no, it is (as you might guess) a very clever bit of programming by the deceased author/programmer, and it is a virtual simulation of the author which is replying. Not only can the simulation pass the Turing test, it can even critique the tyro author’s work.

A real tyro author (I presume), and one who could benefit from some advice from a more experienced hand. To be honest, and without wishing to be too harsh, my question is ‘If Analong are accepting stories like this, what is the quality of the stories they are rejecting?

I’m not sure what benefit there is to go into great detail regarding the story, other than to say it is about a young man who has the confidence (and stupidity) of youth to solve a problem regarding getting into a mysterious alien vault. If would point out Alastair Reynold’s recent novella ‘Diamond Dogs’ which is similarly about trying to obtain entry into an alien artefact. Reynolds is a complex, character-filled story (albeit not without its faults), whereas Muller’s story is little more than what you would expect from someone at the end of the second term of Creative Writing 101.

Another shorter length short story. Obviously at such short length it is only possible to get over an (ideally clever) idea – something that the likes of Asimov had down pat.

Levites takes us to a near future, where those who have committed a heinous crime are sentenced to both life and death. Death as in capital punishment, and life as being downloaded into a virtual simulation, to suffer an infinite time of torment.

The moral issues are debated, in brief, and then a priest, who has been using the last rites to enable some to escape an afterlife of torment, makes the ultimate sacrifice in ensuring that he will take that route. Why does he do this? To get a virus into the program that hosts the tormenting afterlife.

Two big problems with this. Firstly, the way he gets the virus into the software is through his swallowing a processor with the code in it. (Like – duh?) And secondly, surely there would be backups?

In an eight-page story the following phrases each elicited a grimace from me:

especially as they weren’t at the beginning of new sections – they simply started new paragraphs.

In addition to that, the story was just plain silly and clunky. A planet is using non-standard software, and so an official is sent to the planet. The first few pages are spent on ridiculously over the top shenanigans with said official going to great lengths to arrive incognito and unnoticed, and there are moles and – well, let’s just say bleah

At a small one-man terraforming station (partner/significant other recently deceased) on Mars, something strange is happening. A most peculiar life form is spotted, and the pace of change is well beyond what it should be. It transpires that the terraforming has re-awakaned biomechanisms of an alien nature, which have lied dormant for millenia.

The scientist’s AI (a somewhat pedantic C3PO type) is able to determine that the star system from which they originated is long, long dead. Which makes the life forms all the more treasured.

Most unscientifically, when the terraformer’s dog loses its front legs due to the alien lifeform, he incinerates most of them (he has not come to terms with the death of his wife), but finally sees sense before incinerating the last one.

Carl Frederick. The Study of Ants.

Scientists feature regularly as the protagonists in Analog, and this story is no exception. However, Mark is a ‘lowly associate Professor’ who is unappreciated by the Department Chairman Professor Bellwit, who Mark thinks is a dickwit.

Bellwit has given Mark repeated warnings about carrying out personal research in the lab, and another ticking off causes Mark to walk out of the University. Fortunately, he is a man of independent means, and within months has set up his own research station, the better to study his ants.

It transpires that Mark is able to harness the potential distributed processing power of ants, to the extent of being able to play chess against them.

Bellwit turns up at Mark’s facility, as Mark’s influence has put the kybosh on the University’s funding. Bellwit gets into a game of chess with the antal intelligence, but he doesn’t play by the rules, and is threatened by death. Fortunately Mark is able to save the day.

If getting emails offering means of increasing your penis size aren’t bad enough, Lovett posits a web-connected alarm clock blaring out such unmissable offers. What a way for Dave to start the day!

Worse is to follow, as the Amazonian berries offering such enhancement are advertised on both the phone in his kitchen and in his car on the way to work, despite what should have been unbreakable firewalls and his filter list of 457 words and 1,236 phrases. And worse still, his car would now filter weather projections that mentioned ‘an extra three inches’ of snow!

And the final problem: his car is spamjacked – his autodrive is taken over by spammers and he is driven to a warehouse where he can buy the enhancing berries.

Fortunately for Dave he strikes up a relationship with a cop (female), and between them and his old school mate they are able to work out a way of handling spam.

Ah, if it were only that easy!