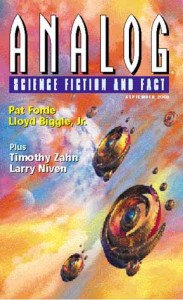 An attempt to make sense of September 11th.

Three decades hence, ‘deep-projection’ technology enables individuals to witness events in the past – time travel in effect, although purely as a spectator. We are presented with ‘Raed’, one of the team of terrorists who carried out the September 11th attacks, but whom was prevented from making the ultimate sacrifice and who has been incarcerated ever since.

He is part of a scientific experiment, as he is shown/immersed in several vignettes from that fateful day. Very much in the style of Charles Dickens’ ‘A Christmas Carol’ the thesis of the story is that by witnessing these past events he will come to see the impact of his actions on others. Which he evidently does, seeing himself as being duped by his more fanatical brethren.

For me the story fails on two major counts. Firstly, the initial motivation of ‘Raed’ is totally glossed over, on the premise that he has used ‘boxes’ in his mind in which to store his motivations and past. This then enables the character’s acceptance of guilt to be fairly straightforward, and, to my mind, entirely unlikely. I feel it is somewhat naive to believe that people who carry out such acts do so without an understanding of the effect they will have on individuals. In this case those of the terrorists who knew that they were going to their deaths knew the likely affect of their actions, and were absolutely convinced that they would not only go to their heaven, but have the signal honour of gazing upon the face of their god, a glory only given to martyrs. In some other countries crowds danced in the street at the television pictures from Ground Zero, and even in Western Europe there was a undercurrent of something quite like ‘schadenfreude’. And talk of ‘war’ with Iraq is in the press at the moment, and the West’s military planners will be factoring in ‘collatoral damage’ in the full knowledge of what a stray missile can do to a residential care. Very, very complicated issues indeed.

A lot of Science Fiction is about understanding ‘the alien’, and September 11th offers us the challengs of understanding the alien that exists amongst us here on Earth. I don’t think that this story does that.

Deep, deep in space, the maintenance crew of a colony ship halfway through a 4,000yr journey are awoken. There is an anomaly – why hasn’t the ship been destroyed by an impact it received a while back? Someone, or -something- has evidently effected repairs. It transpires that the ship has some tricks up its sleeve, for cases such as this.

A relatively straightforward scenario to put forward a potential solution to an ecological conundrum.

Another in the author’s Draco Tavern series, in which a strange alien race face a problem/pose a problem.

Colonists from Earth are finding it very hard to survive on their planet of choice. A very, very strange race of large, godlike humanoids have the humans following a strict protocol in terms of native/human contact. Any deviation from that protocol is met by death.

This unfathomable behaviour becomes more problematic when one of the natives goes rogue. This poses the settlers with another problem in terms of understanding the protocol for that situation.

The story ends at that point, giving this reader a feeling of being left somewhat in the lurch, having being offered a glimpse of a story, but not the whole picture.

An International Relations Bureau office-type is given the chance to try some fieldwork. One of the native races on the planet which they are studying are being terrorised and exploited by another race. Can the humans find a way of helping these unfortunate victims?

Pat Forde’s story is the longest by far, and rather misses the mark, for my money. The rest of the stories are fine as far as they go, but they don’t really go anywhere that isn’t regularly visited by Analog.