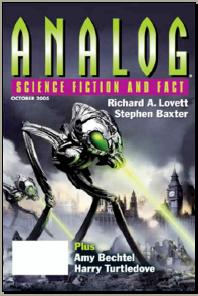 It’s some sixteen years since the cutesy creatures featured in this story first appeared (‘Little Monsters’ Analog, Nov 1989). Seven stories on and it’s getting just a little thin IMHO. I read the last one, notable for one of the worst covers in recent Analog history (if you dare), and which I noted as being ‘fairly routine stuff’.

Well, it’s still routine, bur it’s routine vet fiction as opposed to routine science fiction. There sfnal element are the little creatures that appear briefly, which are somewhat out of the norm, but could just as easily have been ducks. The bulk of the story is about the professional and personal trials and tribs of the vet whose partner has left him (temporarily) and who has to ‘manage’ with some decidedly sub-par staff, a visit from the vet inspectorate, and pet owners and pets with various problems (problems with both the animals and the owners).

The story is closer to mainstream easy reads for those who like warm stories about errant puddy-tats and doggies with a poorly footsie-wootsie than I’m comfortable with.

Joe Schembrie. The Wrong Side of the Planet.

Eric decides to go for a short vacation from his deep mining work into the equally inhospital barren Martian landscape, and has the misfortune to run into a serial psycho at exactly the same time as a humongous dust storm makes life difficult. Without being able to summon help, it is down to his native cunning as to whether he can overcome the murderer in a hostile environment. The story draws on the spirit of the Wild West, as the dry dustbowl that is Mars could easily be mistaken for the barren landscapes of Louis Lamour.

The Northern Lights appear to be having a strange effect on people on Halloween night, and struggling to enjoy himself without his ID on him is proving difficult for the protagonist, as he can’t get into the party without his ID, nor buy something at the liquor store. (Serves himself right for dressing up as Harry Potter if you ask me).

Anyway it transpires that by not having any cards on him with a magnetic ID he is less affected by the Northern Lights, which are evidently making people’s ‘auras’ visible (I thought Analog was the home of robust science, rather than harbouring New Age nonsense?) Bemoaning political correctness and zero tolerance, he ponders if a bland moreness is where we are headed as a race.

Analog frequently has Scientist Fiction, in which a lab-coated scientist saves the day. Here we have a story where everyone is a scientist! The ‘proper’ scientist is a dead one, found, somewhat incongrously, in a dishevelled state in a shabby room which should really be pristine. The local cop and journalist would usually be fazed by this, but they are both amateur physicists, and so are able to put some clues together. Another character has a similar physics bent. But there is a reason for this, and it transpires that the scientist was a victim of her experiment’s success, and with a lot of discussion about Heisenberg and observer-mediated events, we find out that what was happening was ‘localised entropic disturbances’ and the dead scientist disturbed her entropic ass to destruction.

There’s a happy ending as the cop and the journalist (one male and one female I should add, for fear of suggesting any same sex shenanigens) head of to jump each others bones, seemingly not hugely affected by their findings.

The journalist/cop relationship is handled well, and avoiding the lab-coated-scientist-as-hero which appears a tad too often in Analog for my liking is appreciated.

An experienced (ie middle aged) female xenoscientist is leading an all male scientific team on a planet with the intention of marking out an exclusion zone around a sentient race of beings with whom humanity has yet to have contact.

One of her graduate students is is frustrated at his having to follow the no contact rules – and that she is able to live with rules as she has already made First Contact with another species.

Things come to a head when he heads off towards an encampment of indigenous creatures, flouting the law, and she has to decide to what lengths she will go. Those lengths stretch to using her pistol to kill him.

For me the disappointment is that having set this up, the author doesn’t go through with the consequences – the scientist shoots to kill the younger man, but the gun backfires and injures her. Instead of him being dead and her having to live with herself, her injuries mean that instead of making contact the young grad student returns to the human base with her (withou being overly worried out about having her try to kill him). In any case it is all irrelevant as the indigenous creatures come to them, and he is thus able to make First Contact after all. Presumably a happy ending for the humans, but not for the aliens, who are headed for the kind of mistreatment that put the no contact law in place in the first case.

I would have preferred the story to have ended with the crack of her gun.

I approached this story with a bit of trepidation, as I’ve found Creek’s previous stories in Analog a bit … creaky. He still is able to boast the line of dialog that has brought the biggest smile to my face : “See the stubby protuberances atop their heads? Almost like antennae?”

However, this story is more compact and for my money is better for the tigher focus, albeit with the setup a bit too contrived for my liking. Matt Christian is the only human onplanet and when his walrus-like local friend beaches himself in such a way that he is going to die when the sun comes up, Christian has to fly across half the planet to try an rescue him. This enables Christian to reflect on the time when he wasn’t able to do this for his twin sister. Can he get to the beached friend in time? (this is a rhetorical question).

Burns ladles on the satire like hot lard over a roasting hog. Near future US (too near for comfort) in which a fast food chain is, its AI realises, feeding their customers to an early grave. A manager of a local shop has to persuade the AI, which has downed tools, that the restaurant chain is actually carrying out its #1 objective in making customers happy. (You want to supersize that, Dave?)

‘Periandry’s Quest’ (Analog June 2004) was a cracker of a story, which postulated, as Baxter does best (well, very few actually do it at all, but he does it very well), a strange far future Earth (or not) in which the higher one lives the faster time passes. He followed that up with ‘Climbing the Blue’ (Analog, Jul/Aug) which I felt was in contrast only ‘so-so’. This follows on, and really struggles to achieve ‘so-so’, which isn’t something which happens with Baxter very often.

Its a snippet of a story, in which the philosopher from ‘Climbing the Blue’ is forced to fell further down, leaving that which he has left behind to move on in faster time. He and his colleague encounter a strange community controlled by hi-tech computerised wardens. The protagonist works out a way of defeating the hi-tech wardens, but we aren’t told what way, but simply that the way works and they are able to head higher up, back as it were, to their ‘own’ time stream. The story really only serves to get the reader to the last page or two in which a bit of the back history is revealed and the Old Earth setting is progressed. But it feels ‘bitty’ to me, as if Baxter is fitting in instalments as opposed to having had a solid block of time to think through the plot and to write something which flows better. But I’ll be looking out for the next installment.

Howe provides the pick of the issue, although overall the content is AverageSF as opposed to BestSF.