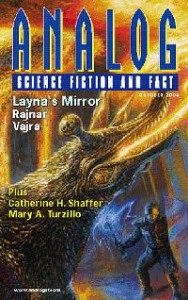 Vajra has become an Analog regular of late. Last month he had a new-future, hi-tech virtuality tale. This month he blends a bit of mythology (Yetis and vampires) with ancient magic and aliens. Buried deep and high in the Himalayas are a strange couple, Marq and Layna. Just how strange gradually unfolds (we start off by Marq referring to the morning as morn, so we know that he is an oldster), as a hapless pair of mountaineers stumble across their lair.

The crux of the tale is how Marq tries (and fails) to prevent Layna finding our her true nature, whilst defending his love from the powerful forces of alien darkness.

It’s fine as far as it goes, as with a lot of Analog stories, but there are quibbles with a bit of unnecessary infodumping in the middle of the story (carbon and silicon based aliens) and things are tied up too neatly and quickly (and, like those mountaineers are really going to go back to civilisation and keep secret what they have learnt).

Racism rears its ugly head on a colony, as seen through the eyes of one of the young children. This comes as a surprise, as the colonists named their planet Tabula Rasa (blank sheet) with the express aim of having a society where race is simply a non-issue. It comes as a surprise then when some of the scientific team have been found to meddling to prevent children of color being born. And when this comes to light there is a pell-mell kidnap scenario when said scientists threaten to flee with the children.

A gentle, leisurely atmospheric piece in which an eccentric elderly uncle shows just how eccentric and just how elderly he is, by taking his neice to see a train making its way slowly, very slowly, through the English countryside.

With virtually a third of the issue given to the third part of Mary A Turzillo’s serial ‘An Old Fashioned Martian Girl’ there isn’t that much in this issue as far as short stories are concerned. Vajra and Shaffer provide workmanlike stories, neither of which will trouble the Years Best anthologists, and Saker provides a slight change of pace and style which is welcomed.