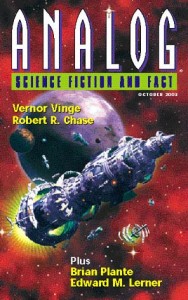 Dixie Mae is pleased with her new job with a hi-tech company. However, a strange e-mail jolts her out of this situation. Something very strange is going on. Very strange.

Vinge posits massive hardware and very clever software, and has an interesting idea, but the story comes across as being just a tad pedestrian – not least in that most of the action is in the form of the characters walking between office buildings!

There’s a palpable lack of emotion as the characters find out that they are just uploads, and in one case a character come face to face with another instance of themselves, but takes it in her stride. Hark back to ‘For I Have No Mouth and I Must Scream..’ for a group of people memorably uploaded into a computer and the human reaction to that circumstance – written some 40 years ago?

And there’s an awful lot of dialogue and tech discussion between the characters, which tends to get in the way of a story developing, and the ending is somewhat anti-climactic – the characters have worked out pretty much what is happening, but resolving it is the challenge on which the story ends.

But having said that, I did finish the story thinking I was holding a copy of Asimovs in my hand, which puts the story some way ahead of the average Analog story.

A mind-wipe of a specific part of a murderer’s brain means that he is no longer driven by those urges which made him a criminal. As he is safe to be put into society, and, arguably, no longer the person who committed the crimes, then surely it is right for him to be freed?

As if being returned to his local community isn’t a big enough challenge to Josh Munz, it turns out that the brain patterns from another person which have overwritten that part of his brain patters which caused him to murder have also left Josh with a residue of the donor’s politics.

Visiting a surviving victim proves not to be a good idea of Josh, as the family are not keen to hear his apologies. However, things are not all that bleak as there is a ‘new technique’ which can sort out the overlayed brain patterns, which will be availble in ‘3 months’.

The issue of rehabilitating criminals, retribution, punishment, and closure have all been dealt with for many years (and recently), and again that special something isn’t quite there.

Classic Analog ‘Scientist Fiction’. A pair of young scientists make a remarkable discovery – creatures which are invisible to the human eye. Not just microscopic creatures, it transpires, but bigger beasts.

Analog have their Probability Zero feature for short stories which have a single idea which isn’t really a goer for a ‘proper’ story, and this comes across as an extended Probability Zero story.

Bringing up children can be a worry nowadays. Plante postulates a none-too-distant none-too-unlikely future in which children have next to no contact with the outside world. Halloween offers a chance to get out of the house to go trick or treating.