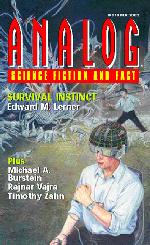 The first lengthy instalment of a novel serialisation which continues on from the events of ‘Presence of Mind’ (Analog, February 2002).

Having been reading short stories almost exclusively for several years making my way through this proved no easy task. Having several characters introduced with personal background information in the standard novel format, and the consequent leisurely pace was not to my personal preference. Lerner handles this ‘science thriller’ competently, although I personally would have replaced the entire instalment with:

“Doug Carey banged his prosthetic fist down by the side of the keyboard, exclaiming: ‘My God! The AI constructs! They’ve broken out of our program! They’re loose on the Internet! And they’re …. evolving!”

An (unfair) comparator for me would be Harlan Ellison’s ‘For I Have No Mouth and I Must Scream’ in which we are immediately plunged in to the nub of the matter, with a little backstory revealed en route through the short story. I did say that this was an ‘unfair’ comparison, on the basis that comparing a short story written by a master with a novel written by an up and coming writer is hardly fair on Lerner. A more appropriate comparator would be the aforementioned ‘A Presence of Mind’, which I felt was just about the right length for the story at hand.

Michael A. Burstein. In Her Image.

Workmanlike courtroom-drama. An elderly actress regrets having signed over rights to her digitised avatar. Can she rely on her son and her lawyer to reclaim her image? None of the characters are likeable, and the plotting doesn’t do much either.

Somewhat uninspired prison breakout story. On an alien planet a high risk felon with amazing (and initially unexplained) powers helps an equally out of the ordinary female prisoner escape an ultra high security prison. (Having been shot in the legs the woman continues her escape by running on her hands – puhleeze!)

The extent of the abilities of the hero were so extreme that my suspension of disbelief was immediately stretched beyond belief. That the story was told in the first person and the nature of these talents were deliberately withheld from the reader was also irritating.

I skimmed to the end of the story.

Timothy A. Zahn. For Love of Amanda.

A private investigator looking for a kidnap victim being held in the mid20th century has to avoid interfering with the career of a young jazz pianist. There have been so many time travel stories written that you have to have a particularly good reason for writing another one. Zahn doesn’t have one. I did ponder after reading this – if stories like this are getting into Analog, what kind of standard are those stories which are being rejected?

There’s a germ of a story in here, with elderly grandparents deciding to take a long, long one-way journey in suspended animation, to wake up to a new life and new youth on a new planet, and their selfish children can’t come to terms with this choice. But the story hasn’t been allowed to germinate, and doesn’t account for much as a result.

Lightweight frivolity in which a vertically challenged Thumbkin proves that size doesn’t count.

C-. Can do better. See me after class, Stanley.