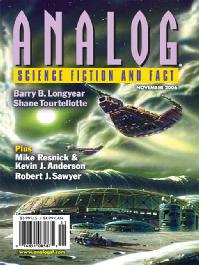 Barry B. Longyear. The Good Kill.

The first, it would appear, of a series of Jaggers and Shad SF mysteries. It’s a sort of low-rent version of Michael Swanwick’s Darger and Surplus stories. Obviously humour is the most personal of tastes, and I’m not particularly fond of cod-Britishness, which Longyear employs heavily (and I mean heavily) in his ‘amdroid’ near future where humans can extend their lives beyond the usual three score and ten by uploading their greystuff into animal bodies once their human form surrenders to decrepitude.

For me the humour is just that bit too broad to tickle my fancy, and I just couldn’t engage with a wise-cracking Duck. Give me Wallace and Gromit anytime.

Kyle Bain is a member of the Knights Temporal, a small secret society who transverse time in order to put to rights murderous acts. He ends up with an ethical dilemma, as the murder victim he is trying to save is a particularly unpleasant businessman who does not stop at anything to get his way, and does not mind who he tramples underfoot to get his way. The job of preventing his murder is doubly problematic, as Time itself appears to be conniving with the murderer. Finally Bain has the chance to prevent the murder – but finds himself taking, for moral reasons, a more direct hand in the event.

Frederick has appeared regular in Analog in recent years, and in Asimovs for the first time in September this year. I found this one more to my liking than has been the case with his previous stories. It starts with a spaceship hovering near a small black hole, its one man crew about to take part in a scientific experiment. The plan is that his ship will move close enough to the black hole to enable relativistic effects to be observable. We then jump to a quite alien future in which strange creatures are reviewing the log he kept during the experiment – it becomes clear that something went wrong with the experiment, and this is gradually revealed.

Through his logs we follow the experiment as his ship initially gets pulled closer to the black hole than planned, leading to greater relativistic effects than anticipated, and he has to face up to his loved ones back on Earth rapidly ageing in comparison to him, the ship’s engines unable to break the gravitational grip of the black hole. The time differential increases, until he witnesses the end of Earth, and, presumably, humanity.

Faced with finally being drawn in past the event horizon of the black hole, he suddenly realises there is a way of escape (no particularly Analog-y scientific brainstorm, but rather he remembers the escape pod!), and Frederick manages a twist in the tail/tale which, whilst a fairly obvious one (the title is a giveaway), works.

FTL travel is made possible by a small few who are able, and willing, to be hooked up to ship’s computers to make the journey through underspace. However, there is a small but growing number of ‘navigators’ disappearing, and investigator Chloe Roberts is one the case. Some scientific analysis points to a part of the universe rarely travelled, and she, with navigator Pascal, head off to this point.

They find an Earth-like planet which the navigators have been keeping secret, using it as a form of retirement complex for themselves, to compensate for their stressful and isolated service to humanity. Chloe is faced with a moral dilemma – does she keep this secret, or tell the rest of the universe? Or rather avoid this choice, and go for a safe middle option (which is what she does, which is a bit of a cop-out!)

The second installment of this serial primarily features Donald Halifax, newly rejuvenated, trying to find his place in society, as a man in his 80s, with work skills and knowledge now somewhat outdated, in the body of a 20-something. Whilst job-hunting doesn’t go at all well, he does hook up with a yougn woman with whom he shares an interest for Scrabble, and he is able to get some hot lovin’ equivalent to putting a Q on her Triple Word Tile.

What works particularly well is the difficulty he has in engaging with the 20-somethings in a bar, who he finds rather shallow, self-centred, and just plain juvenile. (Something I can sympathise with!)

An absence of scientist fiction in this issue, and without lab-coated male scientists solving scientific problems, the better for it IMHO.