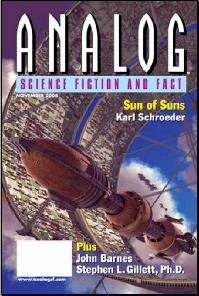 First part of a novel serialisation (although stylistically it opens like a short story – no scene setting, just straight into the dialogue and action.)

John Barnes. The Diversification of Its Fancy.

There is some impressive hi-tech : portals which enable instantaneous transfer between points on different planets, and humans able to upload backups of themselves, and to keep ageing at bay. We find out about these in some very heavygoing info-dumping which at times reads like a Wikipedia entry.

A l-o-n-g way into the story, which has featured several assassination attempts on him (by assassins who evidently never completed Assassination 101), the true core of the story leaps up at the reader and is concluded quite quickly : the protagonists lover finds that she is one of the few who cannot upload a backup, and is as such not suited with a high-risk occupation like being a special agent.

The whole novella didn’t quite work for me, and a bit of research (after the event as it isn’t mentioned in the mag) suggests that rather than being a standalone novella it really is an extract from what is likely to be a further novel in a sequence which has featured some (if not all) the major characters in the story.

Thomas R. Dulski. The Case of the Contumacious Cubit.

A story which is even more heavy going than the title. A research chemist, not happy being an early-retiree, meets up with an ex-colleague (it reads as if the two have met before in print) at a Science Fair, and proceed to investigate something or other. Leaden, unless you have a chemistry background and like stories which feel as if they were written in the 19thC.

The perils of not backing up one’s memory to the available hi-tech are illustrated to the protagonist, who finds he has lost a lot of memory and skills. No great emotional impact as the level-(if now somewhat empty)headed protagonist has to come to terms with the fact that he is no longer with his wife and has to head back toschool again, and does so without any undue concern.