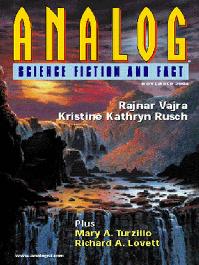 Rajnar Vajra. The Ghost within.

Give Analog regular Vajra his due, he’s quite happy to turn his hand to a wide variety of styles and topics. Here he provides a story which blends a hard-bitten wise-cracking detective with a vr bent. His protagonist is called in to verify the authenticity of an uploaded intelligence. Sadly for me, not the biggest fan of the hard-boiled detective milieu, the uploaded intelligence is an Australian, characterisation of which sees Vajra having said character using words such as cobber and fair dinkum. I may be doing Vajra an injustice, as the Aussies he has met may well use such language, but I’ve met several dozen Australians in my life and none has ever used either phrase!

A six-pager in which a diplomat on an alien planet has to defuse a problem caused by a weapon’s AI. Fortunately the weapon is clever enough to resolve a potentially tricky situation most diplomatically.

Not an SF story in any way shape or form. A woman who had fertility children in her youth, is now in a convent, dying of cancer. She is racked at guilt at the thought of those fertilised eggs which were discarded as part of the process of choosing those which would be implanted. Somewhat saccharinely, those eggs are visiting her final dreams as children, and cheesily uckily, at hear death, she embraces them with a ‘Mommy’s Home’. Bleagh.

An excellent piece which manages to be both nostalgic and forward-looking. In their youth two friends spent a lot of their time playing Strategy League Baseball (should you be interested, I spent most of my spare time between 1984 and 1991 selling Endzone an NFL simulation for the Sinclair Spectrum home computer,which was similar to Statis Pro Football).

With Strossian vigour, Scherrer takes us through the aeons, as humanity uploads itself and expands across the galaxy. How better can those friends spend those l-o-n-g millenia as the galaxy slows down, than by playing out a l-o-t of baseball simulations!

In the near future, celebrities are plagued by paparazzi who now have the technology to capture the dreams of the those they are stalking/have staked out. One young celeb’s dreams appear to put him in the frame for a number of murders carried out in the past, but it transpires that this isn’t the case. However, whilst the is innocent of the murders, there is a reason behind his guilty recurring dreams…

Conclusing installment of a novel serialisation.

Scherrer and Rusch provide two stories of a high calibre.