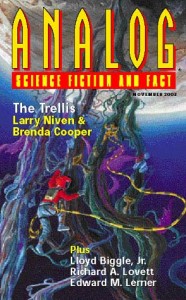 Pluto and Charon are conjoined through genetically modified creepers, which carry water from Charon to Pluto, and also enable the scientists at the research facilities at each base of the creeper to travel between the ‘planets’.

It is Lark’s sixteenth birthday, and she is headed down/up the creeper, where a surprise birthday party, and her father await. However, her journey is far from routine, as her transport vehicle becomes entagled in the creepers, and it is all hands to the pump to effect a rescue.

Lloyd Biggle Jr. The Problem of the Gourmet Planet.

Scientific shenanigens cause problems for those in organised crime, when killing the opposition does not appear to be the last word in the matter.

A short story, with a neat little idea, handled well. As opposed to the zodiac having an influence upon your life, how about the programmes on TV being shown when you were born having said effect?

A short story, with a little idea, handled ok. What if flies are able to spot an imminent attempt on their lives with a fly swatter?

An interesting idea – human settlements on new planets are supported through various stages of developmet through a powerful AI, and at a certain stage a ceremony takes place when an offworlder arrives and assists them in naming the constellations. The story is that a local has been masquerading as the offworlder, and so when the offworlder arrives there is some conflict. A terminally ill child whom the AI can save, but only by breaking the rules in terms of techincal development, add further to the mix.

This serialisation has, for a change, an increasingly lengthy recap of what has happened in prior installments, which reads like the olde Flash Gordon serial intros, only on speed.

Niven/Cooper boldly go where many have gone before, Biggle/Collins/Scherrer/Oltion are fine as far as they go, but four in a row of a similar tone doesn’t quite work. The Manison story is the best of the bunch in terms of invention, although not necessarily so in terms of delivery.