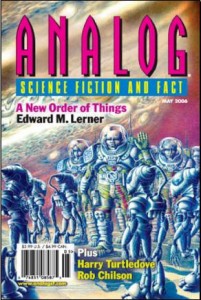 Edward M. Lerner. A New Order of Things Part I of IV.

First part of an installment set in the author’s milieu featuring radio communication with other intelligence species across the universe.

Rob Chilson. Farmers In the Sky.

Fairly routine story, closer to juvenile SF when compared say, to a very recent comparable story by William Shunn (‘Inclination’, Asimov’s April/May [review]). Whereas Shunn’s is a very complex orbiting habitat setting in which religion, faith and culture and explored, Chilson’s features a fairly straightforward story involving a young woman who has returned to her orbiting-habitat family farm after finishing her university course on Earth, and believes that the young Earthman who has followed her is going to emigrate from terra firma for a life in space. He doesn’t, and his expectation is that she will follow him down to Earth.

A science fictional fairy tale in which a young man who desires the hand of a fair beauty, can only win her and her wealth by being smarter than her evil guardian, who has insisted that she will only marry “’..a man who has never been born, who is wearing a cloak that has never been worn, whose shadow is silver and nothing of gold, who can sleep in a fire and never get cold,’” the girl (whose name was Phoevus) quoted to him. “And that is the only way I shall marry.”

The young man, a lazy dilettante, nevertheless has the scientific wherewithal to meet these conditions.

Amongst Oltion’s many and varied talents, he is not only a keen astronomer, but has garnered some kudos for inventing a new kind of telescope. Here he melds astrophysics, declining availability of slide film, and homeland security, although in a somewhat lecturing tone.

I’m not a big fan of alternate history at the best of time, and the first few paragraphs of this were enough for me. It features an alternate Sherlock Holmes and Dr Watson in the shape of Athelstan Helms and Dr Walton, and those opening paragraphs are so creakingly pastiche as to be undreadable for me. There may be an interesting, presumably detective, story Turtledove wishes to tell, but why wrap it up in such an appalling cod-Victoriana? For my money, give me Kim Newman for Victorian melodrama in his Diogenes Club stories – and such as his Soho Golem or Sterling/Gibson’s steampunk ‘The Difference Engine’.