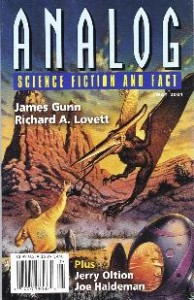 Dr. Russell Pearce has been researching an elixir vitae for some 50 years (I’m presuming he appeared in the earlier story). He is doing this in the knowledge that there are those amongst us who live exceptionally long lives, but knowledge of this Cartwright dynasty is limited. His research has come to an end, as the funding source have finally called time on his endeavours, but a pregnant woman from said family calls on him to aid her in her imminent childbirth.

The story feels somewhat 1950s in some respects, what with the bespectacled female administrator falling for the ageing, but youthful, scientist.

Out hiking with his young nephew, the protagonist recalls a previous trip, long ago, when he happened upon a young woman with whom he felt he made an instant connection. He recalls a choice – to go off with her, or to head home to his imminent nuptials. When his young nephew similarly meets a young woman out in the wilderness, the use of hi-tech enables the older man to review his meeting, and he finds that his memory has been not entirely faithful as, in reality, he did not have that true choice which his memory suggests he did.

The dire illustration by Wolf Read put me in no mood to enjoy the story, and sadly the story isn’t of that much higher standard. Ecologists risking life and limb out on the high seas to protect whales which are being hunted, find that the octopii in the oceans are worried that said whales are increasing in number and hunting them to an extent which is problematic. How do the scientists find this out? Well, an octopus has carved a pictorial representation of their plight in the flank of a whale carcass. No, really.

Bearing in mind that I aim to review Best SF, I would point you to ‘Surfacing’ by Walter Jon Williams, Originally in Asimovs, April 1988, as a story vaguely similar in content but light-years ahead in terms of quality..

Jerry Oltion. Damned if you Don’t.

A tart with a heart of gold enables a young man facing a dilemma (carcinogenic side-effects of drugs he is taking for depression vs depression) to make a life-changing decision.

A pair of xenolinguists are struggling to find the missing piece of the linguistic jigsaw that is preventing them making progress in communication with aliens. But one of them spots the missing piece and, duh, the problem is solved. I refer you, in the manner above, to Ted Chiang’s ‘Story of your Life’. I mean, in this case the linguist has her moment of inspiration when listening to music which has rests, and it is the rests in the alien pattern of speech that they haven’t spotted – for heavens sake, surely this would be something covered in XenoLinguistics 101. What next? a xenolinguistic straining on the toilet with a bad case of constipation and realising that the alien ‘nnnnnnnnnnnnn’ sound is the missing piece of the jigsaw which they seek?

I had the most fun I’ve had reading Analog for some time, in reading the story-so-far introduction to this final installment of a novel serialisation. You would almost think that the summariser was making the summary deliberately over the top. I mean, the potted history of two long-lived aliens schlepping across the globe in various incarnations as scientists, and with a bit of gender swopping is laughable! (Paging Dr. Freud! Paging Dr. Freud!) If you were to run a competition for a humorous, spoof SF novel summary then you wouldn’t get much funnier than this.