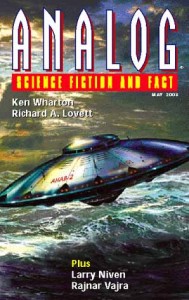 In his editorial in the May issue of Asimovs, Robert Silverberg relates at length (and with relish) a reference book – ‘Science Fiction: the Gernsback Years’, published by Kent State University Press in 1998, and edited by Everett F. Bleiler and Richard J. Bleiler. This volume, all 700 pages, provides detailed summaries of over 2,000 SF stories published in the pulp magazines between 1926 and 1936.

Silverberg relishes some of the criticisms levelled at the stories: ‘juvenile writing’, ‘disjointed, boring, very amateurish’, ‘the first part of the story is interesting, but then (the author) loses control into a mass of absurdities.. in the hands of a capable author, this might have been an interesting story’, and ‘possibly parodic, it is difficult to believe that the author could have been serious’.

Which brings me to the story in hand.

The hero : Professor Evans, a research scientist (this is Analog, remember) with a guilty secret – he failed to credit the work of a brilliant research assistant. Less secret, but equally culpable, was his involvement in a retrovirus gene therapy project which had gone badly wrong.

He finds out that his latest research work is being hacked into by a very clever biologist. Or, to be more precise, a brilliant biologist who is also a brilliant hacker. A scary combination. The hacker goes by the name of Brian.

(We’ll pass over why the genius hacker allowed him/herself to be spotted hacking.)

Professor Evans calls in the FBI, against the strict instructions of the hacker. Aware that they are on his track, the hacker hacks into the FBI computer (gee, he is obviously a really, really brilliant hacker).

Then Evans finds out from the hacker that instead of being Brian, she is in fact Brianna, the brilliant research assistant on whom Professor Evans did the dirty. (But also loved secretly).

The avatar on the screen, which the hacker has been using to aid communication, becomes more lifelike, down to Brianna’s ‘ironic smile’.

Later that night, Professor Evans is researching the reclusive billionaire investor who is funding some of his research, and who has suddenly got in touch. Evans believes that he is ‘behooved’ so to do.

Rather than slipping from sight, as Brianna could surely do, she ups the ante in her standoff with the FBI, threating a nasty fly-borne virus.

A month later… (not a phrase that works well in short stories) the fly-borne virus begins to strike. But she is also working a p53 suppressor retrovirus – effect: longevity.

Professor Evans finds himself in the Oval Office. (Yes, really). He manages to prevent an attack on Brianna, but she lets loose a virus which turns people green, so the FBI are left with no choice.

Surrounding Brianna’s lab, the FBI are about to go in. Professor Evans fears a Waco-style disaster, and by dint of speaking into a newscrew video camera, is able to get a message through to Brianna (she is so clever she can monitor all the messages whizzing about). So when the tanks roll in she is able to reprogram the computers on the tanks, and with jet planes whizzing about and third party helicopters and whatever, she makes her escape. (Honest!)

Within a year… (ouch!) .. four years passed, then five (ouch, ouch!) and Professor Evans gets his Nobel Prize (!). But is Brianna’s threatened Immortality Plague actually working?

Brianna gets in touch again. She has been held captive by the billionaire financier (boo hiss) who is planning to visit the stars now that he is effectively immortal.

Brianna suggests she and Professor Evans run away to the stars together (for indeed, his love has been reciprocated). They don’t, but the story ends with a heart-warming embrace. (Evidently the FBI are no longer an issue).

And that’s it folks.

So, go back a few paragraphs. The phrases picked out by Robert Silverberg were : ‘juvenile writing’, ‘disjointed, boring, very amateurish’, ‘the first part of the story is interesting, but then (the author) loses control into a mass of absurdities.. in the hands of a capable author, this might have been an interesting story’, and ‘possibly parodic, it is difficult to believe that the author could have been serious’. I’m loathe to choose between them.

Another story involving a professor, a young woman, and the FBI. I think Wharton should have a word with the editorial team of Analog, as the positioning of his story does him no favours.

Or maybe it does, as it shows his story to be a better attempt at the science thriller genre.

Presumably scientists get their metaphorical rocks off on stories in which the scientist is asked, both at gunpoint and with an offer of lots of cash, to withdraw the paper they recently submitted to an electronic pre-print server?

There are a couple of twists and turns – who are the bad guys? Who are the good guys? Is it the FBI?

A Draco Tavern story which looks at longevity. One of the visitors to the tavern is engaging in extreme sports (and I mean extreme!). But why? It turns out that he fears being around when the universe comes to an end.

Men and their motor cars! If I had a penny for every time the phrase ‘You love that car more than you love me!” has been said!

Anyhow, far future, and a racing driver and his car AI, which is of a female persuasion, are up against some aliens intent on winning the race. Can the human/AI combo win through? And what of their relationship?

Human-alien communication, and inherent problems thereof, have long been a staple of SF. So a big huzzah to D’Ammassa for having the cojones to start a story with the Pulagi Ambassador and his life partner barbecuing their children on the patio.

Nathan Shaver has the tricky diplomatic task of dealing with the Pulagians. This is particularly difficult, as the communication of the Pulagi involves speaking in the negative for the most part, and imparting each statement with a value that has to be understood and matched by the response. This rarified communication proves problematic (and I think the author goes just a tad too far with it).

But the human diplomat comes up trumps, partly by dint of spelling out in no uncertain terms that the child-eating is deemed beyond the pale. But to counterbalance this threat to the relationship between the species, partakes of barbecued baby Pulagi.

The opening story was a doozy, and I re-read it again in the process of doing the review. Surely a parody?

The rest of the fiction is fine as far as it goes.