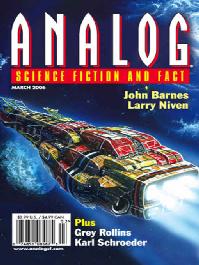 The third issue out of the last four to have a substantial story by John Barnes set in his universe in which people can upload/download brains and step through instant matter transportation devices, but where otherwise humans are little different from who they are now. As before, a few pages in and it was time for me to bale out of the story which is heavy on the dialogue (doubly so as there are two brains in one body and so there is a lot of internal dialogue) and just generally saps the will to live from me. But if you liked the previous stories you’ll doubtless like this one.

A ‘humourous’ story about synesthesia in which a scientist proposes to prove that synesthesia, and creativity, are diseases which can be caught.

A photographer on the moon finds that some tripods have, er, gone native.

Scientist Mystery Fiction in which a scientist is perturbed to find the spider plant in his office is drying out rather too rapidly. The plaster on the office walls is also affected. And the plasterer who comes to fix the plaster becomes dehydrated – terminally so. Can the scientist work out the scientific conundrum? (That was a rhetorical question)

Concluding installment of a serial.

The MobiPocket e-version that I read had, for the first time I’d seen, a number of illustration within, which really improved the reading experience. There were a few problems in terms of story introductions and other editorial not evidently appearing in the right place, and some other minor layout issues, such as new stories starting halfway down a page (why would you do that in an e-version when you don’t need to save space?)

Mind you, the content pretty much left me unmoved.