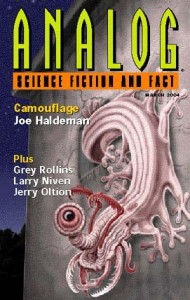 Novel serialisation – Part I of III. Story illustration by Wolf Read, and, to be frank, if Analog can’t/won’t spend the money on decent illustrations for their stories perhaps they should follow Asimovs’ lead and do without?

(The story illustration by Broeck Steadman is of a much higher standard!)

Liam O’Malley and his wife are finding farming on Earth an increasingly frustrating business, and when the opportunity to start from scratch on a new world arises, by means of stowing away on an alien transport, they take the chance gladly.

However, having arrived successfully, aided by a human who specialises in such trips, it all seems to be have been rather too easy. Can Liam work out the conundrum? Actually, he doesn’t have to as an alien drops by and helpfully explains everything! The aliens have been using other races to begin the cultivation of newly discovered planets, and so Liam and his wife, and the other Earth farmers, have only a tenuous hold on the land that they are farming.

A short piece in the Silurian Tales sequence, in the form of a TV interview transcript (!), in which the scientific investigation of the prehistoric planet is under threat from a variety of sources. Surely the religious right and others can’t call time on the project? Well, the National Endowment for the Arts had been disbanded, so the risk may be higher than anticipated.

Whilst in the 60s there were many desperate to avoid being drafted and ending up in ‘Nam, there are perhaps many in the future for whom their near-immortality due to nanotech, and the rather boring life they lead, who would like to swap places. A young man takes this route out of Vietnam, but has a problem when he is due to swop back with the eager combatant who has taken his place, as his doppelganger has been reduced to bits too small for the nanotech to repair. Which leaves his in an awkward place as his remains have been buried and his parents believe him dead.

The lead-in to this conundrum is find, but as the conundrum is resolved fairly simply be the young man getting on the phone to his parents and explaining he isn’t really dead, the lead-in is in effect the whole story, and doesn’t quite have enough to stand up in its own right.

Draco’s Tavern tale-ette featuring a refugee from a race of sundwellers.

Little more than a Probability Zero piece : why is the common cold becoming such a persistent nuisance? Maybe the necessary remedy is a little too drastic?

A riff on the love story across Newtonian Time that Haldeman covered memorably at the end of ‘The Forever War’. Here a woman waits for her lover’s return – but as he is a spacefaring man, and his journeys take, from her perspective, decades, it is necessary for her to head into suspended animation whilst he is voyaging.

Having read Analog for only four years I’m already beginning to amass a number of stories which blur into a melange from which they won’t ever retain any individuality. This is one such. A scientist arrives on a planet to determine whether the native life form is sapient. She is up against local politics, business, scientists, but of course her ingenuity and perseverance means that within a couple of days she finds evidence hitherto undiscovered and which saves the local life forms from being wiped out.