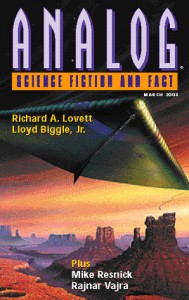 Whoops, read this one a couple of weeks ago and plain forgot to write the review. I wonder how my notoriously iffy memory will stand up to the test….

A future in which mediocrity is imposed by preventing those with talent to nurture and expand that talent. How? By annual mind-swaps, or was it body-swaps – or does it matter which?

The story relates to an athlete who goes wakes up in a new body and finds, to his amazement, that he is in a body which he has inhabited before. This enables him to achieve amazing things on the running track, which of course gets him in trouble with the authorities. But help is on hand from those who oppose ‘Equalization’.

The main character falls in lurve, his career is blighted by injury and, duh, it finishes on the upbeat note that one day Equalization will be overthrown.

I wasn’t entirely sure whilst skimming the story exactly what the point being made was exactly. A criticism of ‘affirmitative action’?

A throwback to the early Asimov robot stories in many ways. A space captain has a conundrum. The safety of his ship and crew are threatened by the existence of an AI on the ship, the presence of whom is morally offensive to a ne’er-do-well who has hijacked his vessel whilst fleeing from his enemies. Should the captain jettison the AI, or risk human lives to save the (in)human AI?

A follow-up to ‘First Impressions’ in Analog, May 2002, although similar in terms of structure and concept. In this story chemical dependency comes under the microscope – should it be seen as a disease, or as a moral failing? One scientist, a stutterer, has a debate with another. These lengthy dialogues are somewhat tedious, although fortunately the stutterer uses his keyboard to get his arguments across, thus saving a lot of space.

Struggling against the stupid politicians and funders, the noble scientist goes under the knife himself, and is cured.

The Inteplanetary Relations Bureau have featured previously in Analog. This is what I said of ‘The King Who Wasn’t’, from Sept 2001:

Biggle returns to The Interplanetary Relations Bureau, which appeared previously in Analog way back in 1961 and 1971. After a few pages I found myself asking : “Why?” The scenario (humans observing less-developed society on another planet), characterisation and plot are quite dated, and the story very much feels of an older age. I have to admit to skipping to the end, and having read the final couple of pages concluding that I won’t lose any sleep over the unread section of the story.

The second of a four part novel serialisation. The illustration is desperately poor.