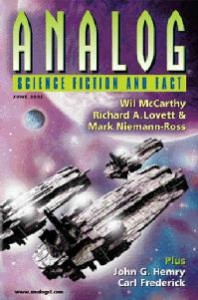 I got halfway through before baling out. The overall premise stretched my suspension of disbelief, and the hefty chunks of dialogue and background setting just didn’t offer any prospect of the story providing relatively routine fayre. There may be clever, subtle stories which look at how technologies of this type may challenge the sense of self, but this isn’t one of them. As with a lot of ‘easy SF’ the characters could just have easily come from a 1950s detective story, with no sense of being from a century or more hence (other than by having slightly unusual middle names) – in a week after it was announed that by 2050 the USA will be more than 50% ethnic ‘minority’.

The story suffered (perhaps unfairly, perhaps not) from being read immediately after Christopher Rowe’s ‘The Voluntary State’, which appeared on SCI FICTION last year, and which offers the kind of inventive nearish future story which is nearer to my idea of what the best SF should provide, as opposed to a story which could have been penned by Isaac Asimov in his heyday (which was fine for those days).

Hemry’s Time Interventionists appeared previously (‘Small Moments in Time’ Analog Dec 2004), and this story similarly benefits from leaving ones suspension of disbelief in the deep freeze. Having just got back from a trip to ancient Egypt, the Time Interventionist finds the effects of meddling in the past beginning to take effect in his present, as the destruction of London in 1908 becomes increasingly solid as a historical fact. He jaunts back to a couple of days before the event, and has to best an Aryan Nazi psycho-blonde who is trying to intervene in his attempt to intervene in her intervention, which is intended to result in success for the Third Reich in the Second World War.

I’m not a big fan of time travel stories, especially those that allow people popping back and forth in time ad infinitum – I know it may sound a bit absurd, but I like some kind of scientific rigour and constraints applied, otherwise you end up in ‘Back to the Future Territory’.

A long story which tries to get too much out of a neat premise. The premise : a website which enables you to create and manouvre, Sims-like, characters which you create. A tech-support duo stumble upon the supposedly moribund website and get drawn into manipulating the the couple they create. However, (surprise, suprise) they are actually dabbling (it takes them a while to figure this out) in real lives. And what of those who created the program, the meta-puppeteers?

The authors go into a lot of detail throughout, such as having relayed a conversation between the two techies as they go through the character creation process in the program, which I found slowed this down. The story then introduces the couple whose lives are being manipulated, and then introduces the couple who created the website, and there’s a heck of a lot of conversing to be done. I was minded of the similarly computer-program related ‘The Cookie Monster’ by Vernor Vinge (Analog, Oct 2003), which did nothing for me, so I reckon if you’re tastes run to Analog rather than Asimovs, then you’ll get a lot out of this.

The story goes touch on some interesting issues, including ‘groupthink’ (when groups of individual take decisions which they would not do invidually), and the addictiveness of such games, but the multiple POV mitigated against focussing on these.

Interestingly the author’s have set up www.netpuppets.com, although the site appears to be … moribund.

Bill (‘Don’t Call Me Blinky’) has his day get off to a bad start when he finds a trout in his pants. Things get progressively more improbable, and the cause appears to be his scientist friend dabbling with Quantum Physics. Neat, although the fusion of improbability, fish, and a couch have striking similarities to the Hitch-hiker’s Guide.

Frederick has had previous stories in Analog featuring ants, mice, and fruitflies, and he returns with another ant story.

He provides a neat twist on the Analog ‘scientific conundrum to be solved in order to live’ theme, as three guys (Shakespeare-quoting protagonist, ill tempered boss) are trapped in a cabin on a spacestation with dwindling air supply. The solution is to remotely control an exploration vehicle on an ant-scale ‘planet’ in the next room which is being used to film an ant-based movie, and to use its blasters to press the ‘open’ button on the door.

If I didn’t know better (ie his previous stories) I’d have guessed Frederick was pastiching.

Quite the most un-Analoggy story to appear in Analog for quite a while. A simple plot description wouldn’t do justice, as the story has a web and a weave to it which needs to be read to be appreciated. Sort of folksy New Mexico mountainy magic realismy honest to goodness weirdness, in which Earth, humanity, and Bears, survive Star Wars (Reagan’s Star Wars, not the George Lucas Star Wars).