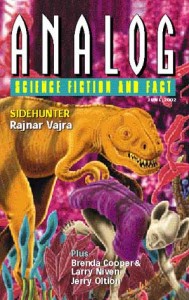 One of the benefits of reading a magazine in electronic format is that you don’t have to worry about fellow commuters thinking that you are reading something of a quality on a par with the cover illustration!

A story which I ended speed-reading towards the end. A fairly routine SF adventure on a planet with an unfeasibly hostile and vicious collection of flora and fauna. Can the hero/ine, a genmod with addons which would make her a shoo-in for the membership of the X-Men, survive and sort out the intrigue and mystery behind the planet? You betcha!

A doctor has to face up to a challenge to her preconceptions and her training with regard to Milton-Shattuck patients. Can one of her patients really have a quality of life at home in an environment which the text books says would aggravate her condition? The doctor’s job is made difficult by her boss (slightly creaky story element, there to heighten the tension) who accuses her in effect of malpractice and whisks the patient into hospital care, which obvoiusly does distress the patient.

Can the doctor get he patient back home into her own environment? You betcha!

A follow up to January 2002 story ‘Choosing Life’ in which an elderly woman decided that a virtual life in a computer is better than death. Or at least a reasonable alternative!

We find her in her virtual world, which comes across (somewhat depressingly) as what I would imagine San Francisco was like in the late 60s – people chilling out and getting in touch with their inner selves. It didn’t appeal much to me!

The storyline becomes that of a thriller, as the main character finds that a hacker has created a duplicate of her in order to embezzle money. She has an identity crisis – the copy is in effect as valid as her, save for the few hours different experience since she was created.

Can the heroine and her doppelganger and her friends manage to keep both versions alive? You betcha!

Another story in a series starring Victor, and extra-terrestrial gumshoe (do they still call private eyes that?). He and his colleague are called in to solve a mystery, and become embroiled with a particularly nasty alien character, and the sister of the murder victim, a tart with a heart of gold.

Quite an enjoyably humorous story, to my mind because the humour wasn’t too forced, or too overdone.

Amy Bechtel. Forget Me Not.

An off-world doctor visits a clinic for assistance with a problem which is affecting his practice. An oversight led to the death of a young patient some time ago, and his practice is now threatened by anxiety which is leading him to worry about similar instances. Can the clinic remove that bad memory?

Jerry Oltion. Ships in the Night.

Another episode in the lives of those zany ‘Astral Astronauts’ (most recently in ‘Cabin Fever’ in May 2002 issue). Here the crew come across a humongous alien ship – and I mean humongous. Beyond that I can’t help you I’m afraid, as there is something about this series of stories which does not engage me at all.

Not a bad collection. Not a brilliant collection. The picks for me were the Lingen and Rollings stories.