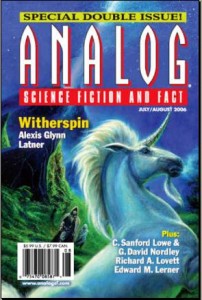 A somewhat contrived adventure in which an enhanced male, with a criminal record, and his female companion have to escape the clutches of various cod-fantasy types after them (trolls, crusaders, sabre toothed tigers), in an orbiting habitat which features several different climatic zones. They can’t call for help, as mobile telecommunications are banned in the hab, and what with the man’s enhanced capabilities you just know they’re going to escape. The writing is a bit leaden at times, has one character who appears who never says anything that isn’t at least 100 words or more in length, and the political and social background is filled in, at length and to no great effect, en-route. It all feels a bit like a Star Trek (Original Series) storyline.

Joshua Wang of Raven Space Salvage and Recovery visits the cod-fantasy playworld of billionaire Emil Hamilton. The playworld is in his spacehab in the asteroid belt. Hamilton has a job for Wang – to retrieve a unicorn on another hab, recently abandoned by its crew. Wang takes the job, with some reservations, and his small crew are soon on board the other hab, confident that they can outfox the AI of the hab, which threatens eternal incarceration in a maze on the hab. Turns out that whilst there is a unicorn on the hab, Hamilton has double crossed them, and he is really after the intelligent rats – intellirats – who are on the hab (and who have somewhat unbelievably not only evolved mentally but also taken on human militaristic uniforms and strategies). So Wang and his crew have to outfox the AI, which is not too difficult, as the literal-minded AI is not match for the street smarts of Wang, and outsmart Emil Hamilton, who turns up, Dr Evil style, to explain all before getting his just desserts.

Scientist fiction, but with a difference – the two main scientists are females (fortunately for traditionalists amongst the Analog readership, the two ladies are shown to have catering skills during the story). The background to the story is filled in immediately, through the device of a press conference, with reporters helpful asking questions. The scientists are up against some a lot of political opposition against their plans to create an artificial black hole, and the story develops with Hilda Kremer’s attempts to get the mission underway and successful (whilst dating-duh- the half-brother of the main political opponent). There’s a dodgy Russian scientist, a fellow scientist who is a double agent and is able to mimic Hilda, and I baled out halfway through a long story which was short on anything new.

Analog does throw up something different, now and then. This is a neat story, in which an AI of a catholic priest bemoans the lack of real human sims in his virtual church, and is consequently enervated when some sims turn up who are evidently human-controlled rather than AI-controlled. It transpires that an approaching alien force is causing humans who have largely lost their faith, to revisit Church. But sadly, future sims who visit show just how much humanity has been lost.

A quick check on the archives after reading the story and writing the above review identifies Plante as showing up on a number of occasions previously as being the pick of the issue.

As in ‘giving someone the willies..’ I mention for the benefit of British readers, for whom willies is rather more suggestive of the male member. A short piece in which a psychiatrists attempting to use aversion therapy to help someone with a food compulsion finds a knuckle-cracking solution.

Carl Frederick. The Teller of Time.

Campanologist scientist fiction, in which (I’m not kidding) Dr Kip Wolverton attempts to come to terms with a belfry-related childhood trauma, through using church bells to travel back in time. If I didn’t know better, I’d have this marked down as very sophisticated pastiche. (p.s. in my 46 years living in England I don’t think I’ve every met someone called Caruthers).

An anomaly : a piece of mammoth tusk, carbon dating showing it only to be 30 years old. What could the answer possible be? For the benefit of those new to science fiction, the answer is of course that someone has travelled back in time to hunt mammoth and brought back the tusk. Maybe a bit above the usual scientist fiction in terms of writing, but an old saw that it’s difficult to get a new tune out of.

Shane Tourtelotte. A String of Pearls.

There’s been a lot of xeno-linguistic SF of late, so presumably the editors are publishing it because its popular. I’m generally unimpressed with it, and this goes to the nth degree, as in trying to find the linguistic breakthrough where others have failed, the protagonist uses a Scrabble-type alien game to get to grips the otherwise untangleable syntax. This involves the reader having to follow, quite closely, the progress of several of these games, which I suppose is a new twist for the milieu. It was otherwise run of the mill for this type of story (with the alien businessman have a wife and two giggling children, so not that alien!), with the exception, that for me the one interesting element of the story was the denoument, when we find out how the protagonist’s manager has played on this arrogant trait to affect this breakthrough.