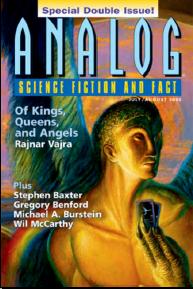 I got a few pages into this story, and then did a check on previous stories I had read by Sparhawk. Some had impressed me, but I found that I had said of the predecessor story to this one, ‘Clay’s Pride’ (Analog Jul/Aug 2004), again, after managing only a few pages : ‘creaky olde-fashioned (Hornblower in Space) SF adventure yarn about First Contact, with the hero spaceship captain having to deal with, amongst other things, a politically-appointed ship commander’.

Anyhow, a lengthy story for those of you who like your SF of the Star Trek variety – there’s even a Captain Kurst.

The lyrics of an old song on a framed piece of needlework on his cabin wall conveniently (overly so) give a cruise liner captain the inspiration to trick the alien deity who is effectively holding his ship to ransom.

The trick the captain plays is a diverting scientific ruse, based on differing probability rules in the universe they are in, although having withheld that ruse from the reader was somewhat underhanded by the author, who tells the story with all the aces hidden up his sleeve.

Brian Plante. In the Loop

The Shady Rest Retirement Home is a virtual establishment for uploaded people – not people retired from work, but ‘retired from life’. Dave starts work there – his uploaded persona wanders the grounds interacting with the residents, giving them a bit of a change and to prevent them getting into a rut.

In constrast to his ‘real life’, he finds the Shady Rest quite fulfilling – good food, friends, and a sense of accomplishment. In his dealings with two residents – a young woman who it transpires is not happy at having being uploaded, and an uploaded persona stuck as an 11-year old boy, he finds he is able to make a difference.

The story loops itself in the way it alternates real life/virtual life, and is another story from Plante which is above average for Analog.

The crew of the Endeavour (previously in ‘Transit of Betelgeuse’ Analog, May 1990) find themselves in a compromised situation, fleeing a supernova but without the wherewithal to survive in space due to their extra passengers. Despite (in fact because of) Chief Astronomer Alex Raymond being physically comatose, but wired into the computer system, he is able to prevent factions on the ship killing each other, and to solve the Cold Equation facing them.

Unfortunate timing for Burstein as I began reading his story about VR teaching the day after reading Vernor vinge’s story on the same topic in Dozois 22nd. Vinge provide a short story with a lot of impact, very vividly portraying a near future in which VR and digital enhancements become integral to everyday life and teaching.

In contrast, Burstein tackles the same themes at much greater length, and consequently to much lesser effect. It’s well intentioned, but a bit cheesy in places and some info-dumping which slows the story down. Give Burstein his due, the predecessor story appeared in Analog ten years ago, so he knows about VR, but in 2005 you should’t need to spell it out to woodenly in an SF mag. But if you like your hard SF easy to read, then you may enjoy this more.

A story which opens inside a Rama-an creation – so someone tapping a password into a keyboard comes across as somewhat archaic!

When a similar vessel is spotted in space, evidently abandoned, a small team head out to salvage it, wary of the origin of the ship – a particularly unpleasant Earth faction. They find that the vessel has been stripped of adults, through a virus which targets only those above puberty, although there are children ekeing out a living. The crux of the story comes with the crew having to discover the answer to the riddle through which they can attain control of the ship and save themselves and the children. You may get some fun out of solving the riddle, or hearing how it is solved. Not me.

A short story in which, her husband having departed for the future, his wife commits the rest of her life to ensuring that there is a future for him to visit.

Two young boys, father recently killed in a war, visit an aquarian. When a microscopic creature which the younger one has become ‘friendly’ with, dies, it causes them, and the member of staff who comforts them, to ponder their attitude to killing creatures.

The story touches on gender roles, childhood innocence, and ethical issues regarding killing insects/animals, but in such a short space, only to a limited degree. More of a story to hand out to a class of 12-year olds to set up a class discussion on these topics, than a major contribution to the debate.

Near-future post-nuclear war Middle East setting, in which microwaves are used to inflict pain without damage. A US soldier is able to use his technical expertise to fine tune the weapon, but muses on the fact, like nuclear bombs, the technology can not be kept in a Pandora’s box.

A story which follows a couple of centuries after the well-received ‘Periandry’s Quest’, which posited a very strange ‘Old Earth’ in which those who live higher up the vertical cliffs in the blueshift do so at a faster rate than those lower down, in redshift territory. Here the impact in the variations in the speed at which time passes is illustrated by the choices made by a young man whose new wife is dying of a disease – does he move down amongst the philosphers and let those worries quickly disappear, or move higher and make a big personal sacrifice in order to find a cure for his wife.

The story is so-so, but the setting is a very intriguing one, and Baxter will doubtless return to this setting again.

A double issue which managed to find a couple of stories beyond the run of the mill, with the latter stories (in the PDF version) being stronger than the earlier ones.