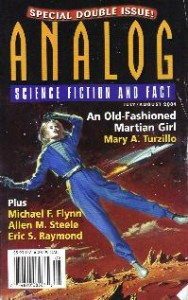 Part 1 of the serialised novel, Mary A. Turzillo’s ‘An Old-Fashioned Girl’

(Story illustration of the type you just do not want any fellow commuters to see.) A team of humans traverse one of the Gates which opens onto a beautiful world. The idyllic life of the the indigenous intelligent life, whom the view from afar, is the backdrop to very human relationsips. However, having struggled with the usual First Contact conundrums, warfare between the locals and creatures from a neighbouring planet erupts, one of the humans pays the ultimate price.

Near-future drama on the moon, in which politics and warfare provide a catalyst. A journalist despatched to a simmering near-warzone finds more, much more, than he anticipated, in a subterranean lab with a scientist (the bwa-hah-hah type) has been doing some very illegal gene-fiddling (note title). The journalist makes a noble sacrifice in order to protect the future of the human race (and is quite cool about said sacrifice).

Short story about aliens who trick us humans with their very hi-tech wonders, only to find (very 1950s SF) that us humans have outsmarted them.

Thomas R. Dulski. To Emily on the Ecliptic.

A story spoiled by being a bit of a mish-mash of several story parts, to my mind. The main character is a writer with writer’s block, and he is helped to get around that block by interfacing with Emily Bronte and Emily Dickinson (waveform stuff rather than time travel). What gets in the way of this central conceit is that additionally the writer is a genmod human, designed for aquatic life, who has some issues over his chilhood, which we get to look back on with him. Additionally, the mechanism by which the writer is able to seek assistance from the Emily’s is a technology left by a powerful alien race a while back, which leads to a lot of info-dumping of the worst kind, with two characters in a conversation taking it in turns to explain to each other just what they know about the aliens.

From my reading of the first couple of pages I would summarise it thus : ‘creaky olde-fashioned (Hornblower in Space) SF adventure yarn about First Contact, with the hero spaceship captain having to deal with, amongst other things, a politically-appointed ship commander’. The hero of course comes out on top, saving the day and getting the girl and eating the pie (p218). If you like the kind of story where characters in the far future say ‘surely you are jesting’ then this is the story for you.

As ever, the consistent, safe Analog fayre, with nothing really out of the ordinary. Flynn’s is the best of the bunch, for what that’s worth.