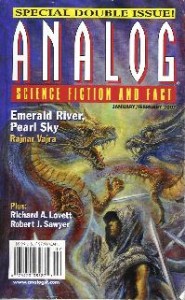 The story starts with unidentified observers from a thousand years beyond the narrative which unfolds, who introduce one Vincas Magus, a wizened elderly man walking on twisted legs along a path flanked by apple blossom. When Vincas is confronted by a too steep bridge over a river we find out that he has magical powers, but that for those powers he is aided, up to a point, by a ‘micro-imp’, some form of internal creature with greater powers than he. It transpires that the exact nature of the ancients who created the micro-imps, and who embedded control circuits in all manner of creatures, has past virtually beyond ken. The rest of the story, set against the background of a forthcoming magicke competition in a cod-mediaeval setting, leads to an explanation in the final couple of pages.

Arthur C. Clarke’s ‘Childhood’s End’, written some 55-years ago, memorably reveals the aliens who have been on Earth for many years, as having the physical aspect of ‘devils’. Here an individual’s response to aliens who come to Earth and have the same appearance is reviewed – a journalist visits one person whose response to the aliens was a violent one. SF does offer the opportunity to look at intolerance, cultural misunderstandings, bigotry and so forth, any many authors have handled these issue in depth and with complexity.

A human sharing a hot-tub with an alien visitor to Earth finds out that he is unwittingly being used to determine how humanity will be treated by other starfarers. The aliens are concerned that humanity’s belief in angels is a stumbling block to our being accepted by the galactic community. The aliens are supposed to be hyper-advanced, and this one is a big fan of Babylon 5 (hmm, those sound mutually exclusive to me).

A shootout at a sandwich bar highlights one possible conclusion to current efforts of parents to improve their children, as a near-future society demonstrates just a few of the problems which may occur as the haves give to their children any number of strange mental and physical enhancements.

A scientist who has steering her career in a variety of directions, the better to increase her chance of having the skillset to be a xeno-psychologist finds that she has been successful in her planning, but has to overcome her fear of snakes to successfully communication with the reptilian-like aliens.

Yesterday I reviewed KKR’s ‘Recovering Apollo 8’ in Asimovs Feb 2007 [ review ], an alternate history in which Apollo 8 was fatal failure of a mission. Here she revisits, albeit in only 2 pages, that mission, but in the ‘real world’, following in Stephen Baxter’s footsteps of not missing a trick to get the most out of research done for one story!

Richard A. Lovett. The Unrung Bells of the Marie Celeste

Wynsten Jones has a one way ticket to oblivion. He is the latest human guinea pig to test a quantum spaceship, which has had a 100% failure rate to date. He’s a downbeat guy, and this seems as good a thing to do as anything else in his uninspiring life. Having pressed the button to start the mission, he is witness to the infinite alternate Wynsten’s and the various life choices they made, until it is just he who is making the trip, and it transpires the journey can be more than a short one-way one, provided you have the right pilot who has made the right choices…

Jerry Oltion. If Only We Knew.

A very cynical view of where American society might be going, with the teaching of evolutionary science very much frowned upon, and genetic purity being enforced amongst the population. Hell, it’s so bad that the young man in question finds that the only option is to sneakily emigrate to New Zealand. (Yes, it’s that bad.)

Neural implants, enforcing good behaviour, seem to be very successful in not only avoiding recidivism, but also in preventing crime by others, as those who are receiving AI input to behave properly can also be directed to prevent crimes in the neighbourhood, which the AI can detect through monitoring a number of information sources. However, the nature of the networked AI becomes increasingly a cause for concern as we find out, through a very lengthy series of conversations between ex-con Manny and his AI.

The concluding installment. Sarah finally cracks the code (by remembering something that she had forgotten, but which was so obviously relevant to the problem that she would have thought of it a long, long time before). Having done this, she dies gracefully, leaving re-invigorated husband Don to chase after the young scrabble-playing booty, his life being pretty much like placing BENZOXYCAMPHORS with the X on a triple-word tile.