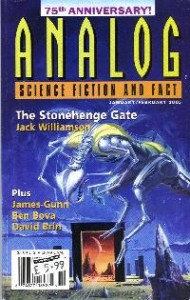 First instalment of a novel serialisation.

A historian visits and berates her politician ex-husband for attempting to push back the period before individual census forms are made available, from 72 to 75 years. She knows the guilty secret which he is hiding, which is the reason for this move, and she tries to persuade him that rather than covering up the fact he should be making a stand for people raised by same sex couples (for that is his guilty secret). She is succesful, and they fall into each others’ arms. Ahhh.

An SF writer who has a near-terminal case of writer’s block sees himself consigned to history as a one-hit wonder. However, a ‘timeline hunter’ visits, showing him the oeuvre by which he is famous in an alternate timeline. He is re-invigorated.

Scientist fiction in which a team of scientists have to overcome the odds to build a lighter than air vessel which can travel pretty damn quick. However, public opinion turns against them (without, of course, due cause), so it’s back to the drawing board.

Mankind’s unmanned exploration of Mars has offended the Martians, who visit the Earth with the intention of meting out eye-for-an-eye justice on those whose names were on a welcome CD carried by the Mars Explorer Rover. An, unusually for an Analog story, there are no clever scientists who can stop them, which is bad news for the 4 million in question! The scientist who works this out is one on the list, but believes that humanity can turn this pogrom to our advantage, in dealing with the Martians to provide them access to those whom they seek.

An engineer receives a strange diagram from an old friend, now missing in action in the (secret) service of his country. He resolves to try and build the very strange engine detailed by his friend, and finds that his friends has stumbled across something very strange, and very much of interest to the men in suits.

One hesitates to be too critical of a story written by someone who has been having their stories published for half a century, but this is a creaky story that might have been acceptable in the 1950s, but really doesn’t cut it for the 21st Century. Frances Farmstead (hate those alliterative names! – very Golden Age) have arrived at their destination, a small planet the other side of a wormhole. The backstory is handled quickly – the crew of the ship are those who found advanced spaceship plans in a book about UFOs, said book having been written by a troubled genius who had smuggled that data out of a SETI project which had decoded those plans from ‘energetic cosmic rays’. Having finally got permission to build the spaceship to those designs, Frances, Adrian and Jessica travelled via ‘..a white hole far beyond the Oort Crowd’.

After a lot of chat (there is a l-o-t of chat in the story) a recce group consisting of Frances and Jessica lands on the strange planet, but has no success in gaining entry to the underground corridors and caverns which their scans show to be there. After more chat, Adrian decides to go with Jessica, and fortunately the previously barred entrances are now open. They enter, and begin a long, long and fruitless journey deep into the warrens, which, being uneventful, gives them a lot of time to chat, and for Frances to make her interminable literary references.

They do however, finally locate a location which provides a fascination moving picture show of very strange alien races. They chat about what this means, and then make contact. But rather than making contact with the aliens, it is none other than an upload of Peter Cavendish, the bonkers genius who set them on their way, an AI which has been lurking on their spaceship. Fortunately the AI has been programmed to be unfettered by the demons which had haunted his creator. Even thought the aliens are extremely cunning linguists, they have chosen to communicate with their visitors via the Peter Cavendish computer program.. Jessica and Mast debate the nature of the appearance, and its trustworthiness.

The boarding party schlep back to the ship, where all two hundred crew are brought together to listen to the Cavendish AI. The crew begins to listen to the AI, but Mast realises that this will be a long session and sends everyone other than himself and Jessica and Frances Farmstead (which is her full name suddenly dropped into the middle of the story?) out of the room. So after spending years in space, the crew head off presumably to do something more important than listening to the full story behind their being there?

Cavendish then, over a period of many, many pages, lets the trio, and the reader, into an aeon-spanning story in which millennia pass in the blink of an eye, and the movement of galaxies themselves is the backdrop of the story. Sadly it is such a tedious process that you just wish for the AI to hurry up – imagine being stuck in a room listening to someone relating to you Stapledon’s ‘First and Last Men’

This story also starts with an alliterative heroine, but fortunately for Lovett, he has the good grace for Brenda Brewster to bemoan her parent’s choice of name in the early paragraphs. Brenda and her friend Tiffany are bemoaning the lack of good men – in Brenda’s case even when you find one, you lose him. However, strange forces are at work, as women from 300 years in the future, in a society in which men are a rarity, have been popping back in time to kidnap eligible bachelors and taking them back to their time. Brenda stumbles across this, and stumbles 300 years into the future, much to the annoyance of Danette, the hunter who had been haunting her favourite coffee bar for prime candidates, (and whose snatch Brenda had unwittingly interfered with) and the Director of the temporal facility into which Brenda finds herself.

It transpires that Brenda’s last boyfriend, who had gone AWOL, had been one of the 21st Century guys kidnapped. The cause of the man shortage is in fact people 300 years in their future kidnapping their men – with a suspicion that this process is repeated ad infinitum through future history, due to a plague which has wiped men off the face of the Earth in some far future.

Brenda is aided in returning to her own time by Danette, and finds that her friend Tiffany had stumbled across the handheld time transportation control left behind when she had been kidnapped, and has resolved her own shortage in the man department by going back three hundred years and findings herself an eligible bachelor : one Wadsworth Huffington, a British gentleman. Brenda puts her foot down (literally), to prevent the 300 year cycle promulgating further back in time.

I would hazard a guess that your enjoyment of the story will be in direct proportion to your propensity for accepting a British character called Wadsworth Huffington, who says ‘zounds’.

Your average scientist fiction Analog issue, celebrating its 75th anniversary with a bunch of stories which could have been written for the most party at any time during that period.