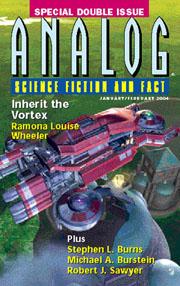 Further adventures of Ray and Rokey, who have appeared in three previous stories in Analog. Captain Ray Harris (human) and Lord Rokhmyr, a fur-covered non-human, are chased by the evil Dr Whorley (bwa ha ha ha), and put down on a remote planet. Their presence awakeness a subterranean creature, who is invigorated by them, and they are lucky to leave the planet in one piece (actually not one piece, as they leave some of their landing equipment behind). Dr Whorley and his crew are not as lucky.

The couple come across an antiquity of shattering importance to Rokhmyr and his race, which needs to be hidden. Where better than in the deep oceans of the aquatic world.

The story ends with the alien intelligence gratefully accepting and integratingthe treasure which they leave – which really is the point at which I expected the story to start, not end!

A wise-cracking private dick story with a difference – the private dick is in a newly grown body, with a copy of his own uploaded AI also in his computer system, so that they can bounce wise-cracks off each other.

The crime he has to solve (if there has been a crime) is that of why a scientist is now evidently addicted to pain through synesthiastic rewiring of her brain after an accident. Is there foul play afoot?

Scientist Danton Grell has a conundrum to resolve when his grand-daughter is arrested on a felony charge. He has to resolve issues over the work/family balance as well as solving the science behind the crime.

Student Haydon has a conundrum to resolve – what is up with his alien foster brother Macarduboth, and Raya, who has clinical depression. Fortunately Haydon is a bright boy and is able to identify the genetic problems from which Raya is suffering, and thereby removing Macarduboth’s cause for worry.

Kendra Zenna Joad has a lunar condundrum to resolve. How to stop a terrorist bomb detonating when the only transport available isn’t anywhere near fast enough to get to where the bomb has been planted before it explodes? A bit of lateral thinking, and vertical bouncing, solve the problem.

Little more than a ‘Probabilty Zero’ item, in that the dangers of relying on computer pattern recognition software in the fight against terrorists is shown to be unsafe.

Creaky plot and characterisation which probably would have passed muster in the 1950s, but not the 2000s. Commander Aaron Eliassen comes back from a space mission to find himself apparently back on Earth before he left. Kept incommunicado by those on Earth who reckon it best for him to stay out of sight, he escapes through the age old trick of pretending to be asleep when his guard brings a meal, and utilising ‘the lock picking skills he had taught himself at college’. Aaron then confronts his own self prior to the mission launch and swops places. Masquerading as his doppelganger until the launch, Aaron retraces his steps into space. However, he meets up with ‘alien creatures’ who explain what has in fact really been happening. He struggles with their names, so decides to call them ‘George’ and ‘Gracie’ (no, really). Anyway its one of those test-thingies by which each race is measured to determine whether they are fit to enter the galactic community.

Short tale suggesting an alternative reason for the dragon-mythology of Arthurian times.

A near-future in which friendships, and all manner of other social relationships are rigorously deliniated, and in which biological bonds are limited (but otherwise an identical society to our own). Bratman uses this scenario to show just how soulless such a society would be.

A writer translating Alice Through The Looking Glass into Hebrew triggers horrors from the other side of the mirror. He has ‘situs inversus’, a condition in which the organs in the body are on the opposite side to ‘normal’, a condition shared by a number of men brutally murdered on the night he himself is attacked. He is able to save the day with the help of a clever investigator who graps the scientific conundrum.

Rather a struggle to get through, to be brutally frank. Now I can get on with reading the books I got from Santa!