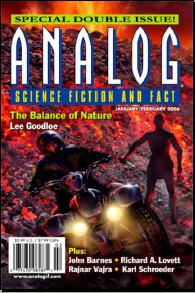 Third installment of a novel serialisation.

John Barnes. ‘The Night is Fine, the Walrus Said’.

Follows on from ‘The Diversification of Its Fancy’ from the last-but-one issue of Analog (Nov 2005), and equally heavy going. Overmuch dialogue, clunky action, and just generally Average SF as opposed to Best SF. There’s plenty of sfnal stuff – people porting their brains over to new bodies when their existing ones age, instantenous matter transportation, but for me there’s no sfnal heart, just a use of those sfnal devices to tell an otherwise tedious thriller story.

Maybe I’m not being fair on Barnes, as I’ve just finished reading Ian McDonald’s novel ‘River of Gods’. It’s near future (within the next century) story, postulating a fascinating future in which AIs play an important part, and is populated it with a wide range of complex and fully rounded characters. ‘River of Gods’ is the kind of SF which should be read in the early part of this new century. The Barnes story is about 20 years behind – even pre-Cyberpunk in its feel.

Lee Goodloe. The Balance of Nature.

A tourist guide is explaining to a schoolparty about the volcanic nature of their planet, and the fact that it’s not a question of if there will be more vulcanic activity and earthquakes, but when. Guess what happens next? Yup, a huge earthquake, and the guide in question has to rely on her cunning and bravery to make good her escape. If young women fleeing tectonic danger on a quad bike is the stuff for you (I can imagine the 80year old ex-scientist males which evidently makeup a lot of the Analog readership having to have a lie down after following her thrilling escape) then you’ll be in for a treat.

A mega-rich heiress heads off on a humvee, using the last of humanity’s gasoline (putting such a vehicle in your story is bound to attract editor Stanley Schmidt’s attention!) to go on a trip with some friends of hers. It’s a coming of age story, both for the girl, who transcends her Paris Hilton-esque spoilt rich bitch status, which is of importance to humanity, as an alien AI has been watching us for some time, wondering whether to dish out some meteor impact discipline, as happened to the dinos.

Vajra is one of the regular Analog writers who does actually provide stories from time to time which I enjoy. This one struggles primarily on account of it being set in England, or rather, in Vajra’s attempts to set the story in England, for the dialogue and some of the descriptions are about as authentic as Dick Van Dyke’s cockney accent was in Mary Poppins. (Or Daphne Moon’s brother in Frasier, for those of a younger generation).

Leaving aside the dialogue, phrases such as “a heavy rainstorm soaked all of Sussex County” just don’t work, because although Sussex is a county, unlike the use of county names in the States, we would never refer to Sussex in this way, we would simply say that “a heavy rainstorm soaked all of Sussex”. Also, the story is predicated on finding ‘plaster chips’, and in England ‘chips’ almost invariably refers to what are known as ‘french (sic) fries’ in the States.

The story features a young boy, helpful teacher, and something about time travellers from the future, golems and what have you, but it didn’t work for me.

Post-First Contact in which those chosen to negotiate with the aliens struggle, whilst a janitor finds that he is more able to communicate with them.

Another story for the pet-loving odd couple who have featured previously in Analog with bonsai dolphins and fishes which could win a spelling bee.

An unpleasant uncle is found dead at the golf course. The bum bag he is wearing is of the type into which, due to its dimensional nature, a lot can be carried. It appears that along with a lot of emotional baggage he is also hefting a lot of excess baggage.

An eco-debate, in which different sides of a climate change debate are (ahem) helpfully aired for the reader in the opening pages. It is the current debate (human-made climate change or simply a ‘natural’ cyclical change) although the setting is somewhat different as it is an alternate history in which the humble acorn is the staple upon which humanity relies, and the thought of using grasses, animal milk, and animal flesh is anathema to many. So much so that those who oppose the radicals who see the reliance on trees as problematic are willing to go to any lengths to protect themselves from this strange minority.

For the most part your average Analog scientist fiction, not so much hard SF as hSeF (hard science easy fiction), with only Sedia/Bartell getting close to what this reader finds enjoyable in SF.