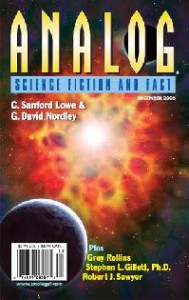 A sequel to ‘Kremer’s Limit’ (Analog July/August 2006) in which Hilda Kremer overcame political opposition to get a mission to create an artificial black hole underway. This story starts with her arriving at a planet circling Groombridge 34A, a long journey from Earth. The scientific experiment is getting closer to taking place, but there are further political problems to overcome even this remote from Earth, made worse by the fact that her father is a senior figure on the planet but is unwilling/unable to take her side when she claims that a message sent from Earth, delaying the experiment, is a bogus one sent by those opposed to the experiment.

Crucial to the drama is the fact that there is no ansible-type instant communication, and there is no way for anyone to query the change in the timetable with Earth. Somewhat unbelievably, there is no further communication from Earth in the long time time prior to the eventual launch. However, as soon as the launch has taken place, on time thanks to Hilda, there -is- a message from Earth in which the champagne corks are being popped to celebrate the on-time launch. This message is well-timed for Hilda, as it enables her to prove that she was right all along at the climax of the narrative. But the fact that such a message is sent after the launch without -any- final messages in the run up to the launch, rather draws attention to the fairly thin ice over the big plot hole on which the story had been skating.

But there’s a wonderful piece of dialogue in the story, which I’m glad I didn’t miss : “Dr Lobov, that’s a fourth power in the denominator! To reduce the triggering threshold by three orders of magnitude, the Johanseen quintessence multiplier field would have to be twelve orders of magnitude higher!” The ultimate in scientist pr0n! Imagine Angelina Jolie with her hair in a bun, wearing big glasses and a white lab coat, saying those words… ohhh…..

Further PI adventures of Jack Sawyer, whose sidekick is a virtual instance of his wisecracking self. It starts with a glamorous dame turning up on his door.

A race amongst private companies to claim a prize for the next person to put foot on the Moon is underway, and an open source collaboration is in the running, which offers an interesting angle on space exploration.

Running a close second, the big prize beckons the nonprofits when the leading spaceship suffers an accident, which kills one crewmember and puts the remaining crew at risk. Does the open source crew go to their rescue and ergo lose the race to another ship? The story works better than many of this ilk, in that rather than simply offering a scientific conundrum, there is an added dimension of much more than the usual cardboard cutout crew, with many egos at work and clashing against each other.

The ending is a subtle one, giving a realistic complexity of issue.

A shorter piece of scientist(cum gardener) fiction, more suited to the ‘Probability Zero’ slot in the magazine.

Again, a shorter story of the ‘Probablity Zero’ type – ie, no real narrative, dialog or action, predicated on some chemical shenanigens. I did try to read it a couple of times, but its three decades since I completed the three years I ‘studied’ chemistry at school, and the story, like my Chemistry lessons, went in one ear and out the other. Not that I was reading with my ears, but you get my drift….

Stephen Baxter has cornered the market in far future humanity’s response to climactic changes, so it’s a brave writer who enters his territory. Actually he’s written so much of this type, he’s basically put down territorial urine-markers around the entire landscape. Schaffer takes a somewhat cutesy approach, of an Xmasy nature, to tie in with the December Xmas issue.

This hampers her by the fact that the ‘Xmas issue’ comes out months before Xmas itself, and whilst after a Xmas dinner, a glass of port and several mince pies I might have been more inclined to give the story the benefit of the doubt, very early November in bright sunshine did not incline me so to do.

I’ve continued with this serialisation, partly I think due to having the pleasure of a paper copy of the issue in my hands, rather than an e-version as I’ve had of late. The story primarily focuses on the rejuvenated Don’s relationship with the foxy young Lenore. He scratching some long-dormant itches with her, whilst with his still-aged wife Sarah he is able to have lengthy discussions (which are described -yawn- in full!) about morals and ethics. This is predicated on the element to the story which I haven’t mentioned in previous entries, that the alien communication received from afar is a multiple-choice survey on ethical and moral issues. It’s an interesting idea for interstellar communication, but somewhat difficult to believe that without a lengthy two-way dialogue aliens have been able to send a survey which we can decode, and which asks questions eminently pertinents to 21st century Earth.