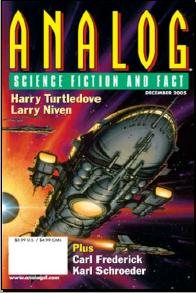 Second part of a novel serialisation.

Another alternate history from Turtledove. His ‘He Woke in Darkness’ (Asimovs, Aug 2005) recently gave an (obvious) alternate take on the Civil Rights movement, Here he details a scientific journey in which a possibly extinct species of large bird of bird is being sought on an Atlantean island. The entertainment factor comes in the detail of the trip taken by a 19th century ornithologist, as opposed to any real alternate history elements. For me, with Sir Arthur Conan Doyle having written several Professor Challenger stories a l-o-n-g time ago, this story felt very retro for 2005.

Fairly laborious scientist fiction in which a pharmaceutical research stumbles upon a cabbage of ancient pedigree which has had (and will have) a major influence on the development of the human race. Again, as above, some 20 years after Greg Bear’s ‘Blood Music’….

With Earth about to be decimated by a meteor, and elderly man sees off his son (with whom his relationship is strained) and his grand-daughter, the separation from whom is going to be harder. Short and explores some of the interpersonal issues, but just too much of a vignette for the story to work well.

Story which takes to a logical conclusion the problems likely to be faced in the future with AI and automated computer systems.

Larry Niven. The Slow Ones.

A Draco Tavern story, notable (for what that’s worth) for it being set in the very early days of the tavern, in which we find out (duh) that aliens can be quite … alien. (Dangnabbit, I’ve been reading SF for 35 years and hadn’t worked that one out!)