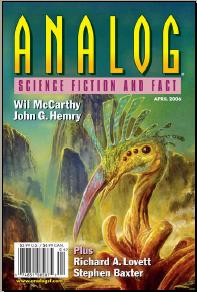 National Weather Service astronauts have a surprise visit – from Pope Dave : cue the joke about the Pope driving his car instead of his chauffer, and some other creaky dialog. The story gives some ponderation to the role ‘God’ may have in quantum events. Why primitive superstition should come into the equation is beyond me.

Stephen L. Burns. Nothing to Fear.

We follow, through his diary, the trials of a scientist who is plagued by any number of fears.

Stephen Baxter. The Lowland Expedition : A Tale of Old Earth.

Another in a series of linked stories set in the intriguing ‘Old Earth’ in which time passes more quickly the higher you are. But for me the initial enthusiasm for the setting has waned a bit as Baxter ekes out more of his ‘sidebars’/’pendants’ as he is wont to call them.

Scientist Fiction which starts with a dissertation defence, and whose story consists of the real-life experience which gave the student the flash of inspiration to solve the tricky scientific conundrum with which she was faced. Maybe the scientists amongst the readers will find the detailed explanation of the role of ‘deuterium’ gives an added frisson, but for me it could equally have been ‘kryptonite’ or ‘dylithium crystals’.

Carl Frederick. The Emancipation of the Knowledge Robots.

Mercifully short shaggy dog story, but has there ever been such a weak closing play on words in such a story?

I have to admit – dramatic drum-roll – to enjoying this space adventure. OK it wasn’t Alastair Reynolds or Charles Stross, but it was a bit above the usual Analog fayre in being populated by some three dimensional characters and a page turning plot.

A cop with a back-history has to find out what drove an otherwise upright pillar of the community to take his neighbours gun and go on a killing rampage. WHen he plugs into the cultprits VR console, all is revealed.

Hemry the pick of an otherwise average Analog issue.