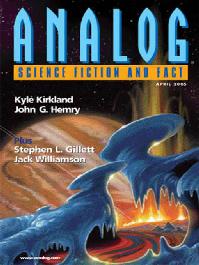 Third and final instalment of a novel serialisation.

Merv Dunn, Inc, is an infomeister in a particularly unappealing near future, in which those in the private sector are fully incorporated, and look down on the ‘sheep’ who work for a living – particularly those working for the government and nonprofit sector.

A newly formed scientific company have hit up a way of fine tuning the social stratification, so that the ‘sheep’ fit into discrete categories. Dunn refuses the new corporations entreties to work for them, and uncovers unpleasantness between the partners, who have been each manipulating the other.

A very wealthy heiress is miffed when the planetoid she has purchased to vaction on, explodes. The insurance company is reluctant to pay, and they travel out to solve the perplexing cause of the destruction. They solve the scientific conundrum (as is inevitably the case in Analog) and, erm, that’s it. There’s a bit of creaky characterisation of the heiress, with a multitude of personas on which she can draw, but the story is little more than a bit of hard science doodling.

Melody Lance, holostar, wants to improve her robot minder, Carl, to be more human. Her human minders are ineffective in protecting her from a violent stalker, and it is Carl who comes to her rescue, although in doing so uncovers the vested interest she has in making his robotic self more human.

Short satirical piece in which the success of the Mars lander missions, controlled to the nth degree by those back home, lead to a similar control-freakery on a manned mission, when the poor astronauts have to sit back with their every movement controlled from NASA.

An astronaut off on a mission is able to send and receive letters to his girl back home, via the wormhole which is taking him and his colleagues to Alpha Centauri. It will be a 7year trip for him, 15 from her perspective. ‘Phooey on Physics’ says the girl, as the temporal paradoxes baffle her, and I echoed her sentiments heartily, but if you don’t tax your brain trying to sort out the logic, then there is a heart-rending twist in the tale, as the astronaut is able to see what the future holds for his erstwhile bride, and is able to communicate with her (as far as those censoring his letters to prevent him causing a time paradox) will allow.

Slightly better than the average Analog issue, with Hemry’s satire and Plante’s discumbobulating temporal love story with a sad twist ending (the PDF version at least) on a strong note. And a bonus with the PDF version – no cheesy interior illustrations!