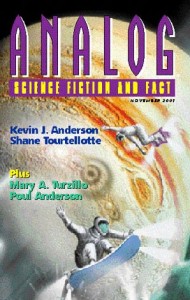 In recent months I’ve been reading Analog in digital format on my palmtop, courtesy of Peanut Press/Palm Digital Media. In addition to being portable, one benefit is that you aren’t seen by fellow commuters reading a magazine with a cover which tends to support the general public opinion of SF being about BEMs, space ships and so forth.

And, m’lud I present the case for the prosecution (Exhibit #1 to the right.) Now I know I’m not up to providing insightful literary criticism of fiction (give me time…) but when it comes to artwork, I do feel more confident in this respect. So here is my considered opinion of this month’s cover: AMATEURISH. Maybe cover artist Victoria Green is 10 years old, in which case she should be encouraged. But not by putting this illustration on the cover of a magazine.

So, sitting down in front of my PC, thinking what to say about the first story, I have the word AMATEURISH pinging throughout my brain case.

Hmmm. I’ve also just read Gabriel Chouinard’s latest column in SFSite, in which he criticises the overall level of reviewing in SF. He picks out Nick Gevers for praise, on which I agree wholeheartedly. He complains that too much reviewing is simply a description of the plot, which is something I tend to veer away from myself, and is a criticism I would also level at many reviews. But I feel inadequate having read his criticism. Surely I need to be more analytical and thoughtful, and spot the literary allusions and so forth.

But then again, I’ve got a demanding full time job on my hand, so that’s out of the question! So I’ll stick to being comprehensive in my reviewing, concise, and hopefully a little entertaining.

So what to say about this story? Well, it took some getting through. (Granted the TV for once had something that demanded watching, and watching for several days). The basic trope (I picked up that word quite soon after starting reviewing – nice touch of class) is a relatively identifiable future in which humans have the ability to ‘swap’ minds. All manner of opportunities are thus possible, including gender bending ‘naughtiness’. And that’s pretty much it. There are a couple of bursts of ‘high drama’, and the characters are youngsters brought up in a monastery as unwanted offspring following temporary liasions (obviously birth control got lost on the way to this future). Some religious mumbo jumbo, and one child who is capable of seeing the true soul within the body….. enough already!

The Thrill of a Lifetime. Brian Plante.

This story slipped through a tear in quantum sphinctal space. Instead of Virtual Reality being used to explore the limits of what it means to be human, here we have a very 50s style approach – people can opt to be come a disembodied head floating in a vat, linked to a mechanical body, which thus enables vicarious pleasure. Some computing stuff and a crime-solving denouement do little to clarify what the story was meant to be saying. If anything.

Whoa, I’m building up momentum here. Alternate History Of The Worst Kind. Take an idea : “Hey, What if Tianamen Square was, like, Trafalgar Square, and the Chinese were in control in the West?” And that, gentle reader, is it.

oon (verb): to get paid for a few minutes work with brain disengaged. What next, Poul Anderson’s shopping list?

So what if after a cat dies, it gets its mind transferred to a robotic body. (1500 words, double space. Assingment to be in week Friday.)

Jake, me and the Zipper. Rajnar Vajra.

Analog standard plot : off world with indigineous species having some curious attributes, which just manage to save the day at the end of the story. Phew!

Shane Tourtellotte. The Return of Spring.

Well, praise to Analog for the excellent illustration for this story. Stand up and take a bow, Janet Aulisio.

And praise to Tourtellotte for ending the issue with a very, very good story. Shades of A Flower for Algernon, with just a slight moue of concern over the wishful thinking behind the plot.

An elderly man struggles to orient himself in his house, which is strangely different. He, and the reader, gradually become aware of what is happening: a wonder drug is restoring an Alzheimer’s sufferer back to normality. But a medical cure is one thing – what about the pain and suffering of those close to him, the sacrifices they have made, and the burden they have (willingly) taken?

If the Tourtellotte story had been at the front of the issue, and the Aulisio illustration had been on the cover, this review could have been quite different.