Analog Science Fiction and Fact, May 2002 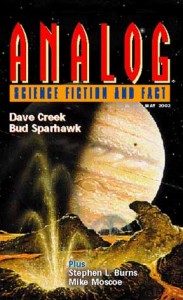 A third ‘Splendor’ story, following two published in Analog during 2000, neither of which I have read.

Earth Unity Ambassador Chanda Kasmira faces a tricky situation when she is re-united with Sobrerian commander Domerlan, with whom she has had a run-in before.

This time the belligerant Domerlan, whose race are sufficiently advanced to be starfarers but have a problem in recognising another starfaring race (us) as sentient, are on board a vessel belonging to a third race. When that vessel crashes into a sea, a submarine rescue is required, made more difficult by the uncompromising Sobrerians, the third race, and something very very strange on the ocean floor.

Fairly routine SF adventure, which would probably help aficianados of this type of fiction pass an hour or two quite pleasantly.

Quite different from the usual Analog fare, a story which would probably be more at home in F&SF.

A visit to the Deep South to finalise a big business deal finds Jeffery Davis on a plantation straight out of something from the 19th century. The only thing missing, ah say missing, boy, are slaves. And that where Davis comes in, as he is a key player in a hi-tech company that provides very lifelike and advance simulacra. Can he overcome the very obvious ethical issues and agree to supply slaves for the plantation.

Naturally, the situation is made much more complex than it would at first appear, as not all is quite as it seems at first.

The latest in a series of Sam Boone stories.

Sam, as I guess is usually the case, finds himself having to manage a tricky situation, this time mediating between two very hostile races. Not really my cup of tea. If you want to take the tea-test yourself, you can click over to Fictionwise and buy this story in electronic format.

More wacky adventures of the Astral Astronauts, who have graced the pages of Analog several times before in recent years. You could have told me they had appeared during the 1940s and I wouldn’t have been suprised, as the story is a tad (a tad is a quark10) old-fashioned. Don’t suspend your disbelief before reading the story, put it in a box and DHL it a long, long way away.

A programme to take forward a new technique to impose more societally acceptable mental templates on violent felons has to get past substantial political resistance to obtain further funding.

The solution is in the hands (or the heads) of the politicians.

An intriguing take on the personal costs involved in taking the opportunities the future and the stars will offer. An octogenarian with a long, varied life behind her, has the opportunity to take her memories to the stars, and to teach the young of another race. The drawback – it is not so much teach as to pass on her memories, and to lose those memories in the transition.

Is the price of losing old memories too high a one for the opportunity for longevity and star travel?