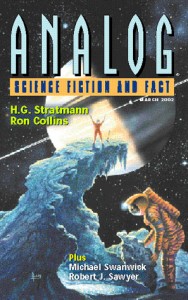 A most peculiar story. The International Space Station a few years hence is the setting. The hero, the all-American medic who is looking after the rest of the crew. The rest of the crew include a relatively ageing Russian astronaut (short, thick set – you know the type), and his extremely glamorous wife. She is reputed to have slept her way onto the mission, and has taken to flouncing around the module in a flimsy negligee. (!)

Spurning her advances, Stone (rock like and impervious to her charms due to his love for his wife) comes upon her ‘entertaining’ everyone else in a naked zero-gee gang-bang. If this isn’t bad enough, her husband has a myocardial infarcation which needs them to make a decision as to whether to risk him being taken down to earth in one of the shuttles.

Deciding to risk it, it gets worse as the shuttle’s batteries blow once they separate from the spacelab, and they are going to plummet to Earth. Unless they can find a workaround.

I only know Stratmann through a previous story in Analog in Jul/Aug 2001 – ‘Naked Came the Earthman’, which featured nudity. I think he needs to get out more.

Standard Analog fare, with the scientist as hero. Torrance is an elderly scientist, somewhat discredited through his belief that life exists on a planet in the Alpa Centauri system/

Evidence suddenly arises to support his belief, but before he can act on this he is recruited, unwillingly, to carry out an assassination on a fellow scientist (‘ve vill murder your children Dr Torrance if you refuse’). As to why a major security force on Earth has to recruit and train a scientist in techniques to kill a man is somewhat flimsy. Irritatingly, it is also entirely unnecessary, plot-wise.

He attends a scientific meeting, which gives us lines such as ‘Parsons stood on rickety knees, gripping a brown cane. His back was bent like a hook. His pate was bald and mottled.’ Do people use the word ‘pate’ in the States? They sure as hell don’t in the UK.

Torrance finds himself witnessing the death of the man whom he was supposed to have killed, the victim of a terrorist organisation. He persuades the assassin that he has evidence which the terrorist group need to know, and is taken on board what is in effect a suicide vessel. (Black holes are involved in the potential destruction which will be wreaked upon Earth.)

With the resistance to pain of Bruce Willis in Die Hard, the air duct scrambling capabilities of Gordon Freeman, and the martial arts expertise of Jackie Chan, the hero scientist saves the day. The dramatic tension. Is developed through. Increasingly short. Sentences. At one point in a fight he ends up ‘atop the engineer’. Now then, ‘atop’ is one of those words which when it appears sounds alarm bells. A previous Analog usage which I particularly enjoyed was Dave Creek’s ‘Swarming Korolev’ in Oct/Nov 2000 in which, having seen colleagues horribly murdered, the hero is chased by aliens. Hiding from them he refers to their alieness to a colleague : “See the stubby protuberances atop their heads?” ROTFL

Part of a series, so maybe the story comes across better within context.

Five page story on the nature vs nature. What will one identical twin (a young Baron) do with his difficult brother. Both of them are non-genmod and have 100% original DNA. The awkward brother wants out.

Obviously there are lots of Analog readers who lap this kind of stuff up. A discredited scientist spots an evident conundrum with regard to the space elevator on the Galapagos Islands.

Can he spot the technical issue and solve the problem. You betcha.

Actually, I’m being a tad unfair as the scientist’s relationship with his wife, the tensions caused by his infidelity, and his having to make up his mind over his future, are all actually well-handled, which is more than is often the case with stories of this ilk.