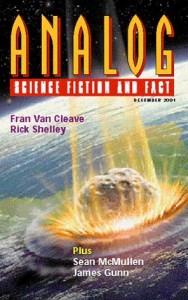 Fairly routine story of a young Navajo girl who is struggling against family and cultural traditions. She sees the gleaming space plane in the desert nearby as a route for the development of her tribe and her personally.

The gung-ho space mission is sponsored by a multi-millionaire, with a by-the-seats-of-his-pants ex-fighter pilot flying the vessel. Forces against the mission are both close at hand, and far distant (China!).

The story is punctuated by details of the food the young girl cooks in the canteen, and references to the hair colour of the characters. Is the story meant to be aimed at younger readers? It felt like it to me in the writing style, and the plot was a bit creaky at times (security so lax a bomb could be placed on board the space plane).

A counterpoint to Ian Watson’s recent ‘One of Her Paths’ (F&SF Oct/Nov 2001 – reviewed here. Watson’s is a strong, powerful story in which the experimental use of quantum space gives rise to problems relating to multi-threaded quantum possibilities.

In this story Gunn takes a slightly more straightforward approach. The title and initial reference to ‘curioser and curioser’ from Alice in Wonderland doesn’t set the story off particularly helpfully. In the wormhole which causes problems in his story, sequential nature of perception is compromised, and the crew members have a disjointed, non-chronological series of problems to resolve.

The cause of my problem with the story may be akin to the story conceit – an editor’s note at the end of the story refers to three previous stories to which this one is a sequel (Analog issues Nov 99, Jan 2000, Jul/Aug 2000). Maybe I’m missing something through not being familiar with these ‘Gift from the Stars’ stories?

This is one Christmas which is going to go off with a bang.

Unfortunately, the bang in question is to be caused by a meteor strike on Earth. Deep in the woods an elderly couple await their fate, deciding a headlong flight into refugee status is not for them.

A bright light in their house heralds some … strange .. visitors.

Aliens, perhaps. But in fact they are travellers from the future – descendants in fact, come to do some primary genealogical research.

The Great Miracle. Michael A. Burstein.

A shortish story, in which an elderly man reflects, during the winter solstice, with his grandchildren, on his role in liberating the Earth in his youth. A role made possible by a miracle.

Like Gunn (see above) I found this story somewhat compromised by its proximity in my reading to something not entirely dissimilar. In McMullen’s story we are taken to feudal England where a feisty Lady is shored up in a castle under seige. She is felt by many to be either a witch or otherwise a user of magicke. In fact she has been studying and designing a means of flight, and has a prototype hang-glider ready to test and to make her escape.

The story has two twists at the end – firstly the actions of the besiegers, and secondly the revelation that the story has been ‘found’ through manuscripts and scientific study of an ages-old corpse.

This story is fine as far as it goes (which isn’t particularly far, but it passed an enjoyable 30 minutes on the train), but the main problem for me was the fact that I am halfway through reading ‘The Forgotten History of Ash’ by Mary Gentle, a complex, dark, brooding and powerful story of a mediavel character, whose story is revealed in stages throughout by contemporary e-mails from researchers unearthing the past.

The pick of the issue for me. (Wolf Read’s illustration notwithstanding.)

Fifty years on from First Contact, and Earth is struggling post-Catastrophe (not linked to the First Contact).

As has been a theme recently (Nancy Kress’ ‘Savior’), First Contact has been frustrating for humanity – they came, they left a data-gathering robot, they left!

Woody, born five years to the day after First Contact, is heading back to the national monument commemorating the landing, believing the 50th anniversary of that landing to be the day on which the aliens will return. His journey is made difficult as the transport system is close to collapse, but he manages to get there, picking up on the way a fellow traveller, a young girl who stays, initially, emotionally and physically detached. Their relationship develops slowly.

He also picks up the robot which is data-gathering on behalf of the aliens. Two things jar for me with the robot – it’s description (a box on wheels) doesn’t quite fit with my idea of an advanced civilization artefact, and his meeting the robot is IMHO not only unecessary to the story, but counterproductive.

The story works because it is fundamentally about the inner thoughts of the main character, and his desperate yearning for contact with the aliens. That desperate yearning is of course not met, giving a bitter-sweet ending which is undeniably upbeat and moving.

I would put this forward as one of my favourite stories from Analog this year.

For me the Linda J. Dunn and Rick Shelley stories are quite some way ahead of the others in the issue.