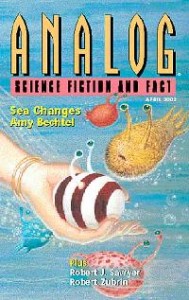 Long-standing readers of Analog may recall four previous stories over the last ten years by this author in which a veterinarian has some clients with some strange aquatic ‘pets’.

I haven’t been reading Analog that long, but can’t recall any of these stories having been collected in a Year’s Best during that period. Hmmm, I wonder why?

Fairly routine stuff, in which said aquatic pets reproduce and said vet has a similar change in his domestic life.

A film crew are most put out to find their shooting schedule is under threaten from rain – for in this arid part of the country precipitation is almost unheard of. Can modern science compete against more fundamental magics?

Two chum(ps) are hanging loose dude, getting away from the hi-tech life and into the mountains. However, they get too close to nature, or at least nature gets too close to them when a lightning strike fritzes their hovercar and takes out all, and I mean all, electrical equipment.

Thus stranded from humanity, they have to resort on their animal cunning to return to civilization.

Fortunately, one of the young dudes has spare capacity in which to upload his friends persona after he suffers a physically fatal heart attack.

A short short story. Sheffield probably thought up the story whilst flossing his teeth one morning.

Not that the story relates to dentists drill (if that is the leap my mind has just made), but to the scientific test to determine whether something coming through customs is in fact a diamond.

Richard Foss. The History of Chan’s Journey to the Celestial Regions.

The Imperial Chinese were using fireworks millenia ago. What if they had designs on manned spaceflight?

The issue ends with a lengthy final installment of Robert J. Sawyer’s novel ‘Hominids’. This leaves the short story content particularly thin in terms of content and quality.