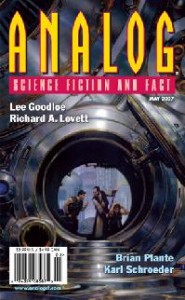 Courtesy of a plane journey, and a lengthy delay on a train, initially caused by a lineside fire, and then a ‘suicidal person on the platform’ (presumably made so by yet another delay), a lot more reading has been done over the past few days.

Lee Goodloe. Damnded If You Do…

Whilst off-piste skiing, Chad Gutierrez avoids an avalanche, only to find himself in uncharted territory in the remote mountains where his hired helicopter dropped him off. He comes across a valley with a deserted goldmine – with not only the mining equipment and houses left in a Marie Celeste style, but with lumps of gold lying around.

He manages to make his escape, but the memory of the mining settlement is slipping from his mind : something strange is causing this to happen. The story unfolds somewhat awkwardly, through him fleeing (twice) from parties evidently wanting to keep him quiet, and some story explanation through the military. He finds out that there is an alien device in the valley, which has been trying its quantum best to stay hidden, and when it, and fellow devices, realised their cover has been blown, it is they who start blowing up, big time, and calling in nukes which have evidently been lurking, unseen in space, for some time.

It reads rather like an X-Files episode, although you need to bear in mind that I only saw three of four episodes before coming to the conclusion that that series was not my cup of tea.

Quite a different story from the usual Analog fayre, which eschews rigorous science in favour of a bit of societal analysis. The setting is a USA which is less united than is the case, and with a societal split between the urban types on each coast (Blues) and the more rural folks in between (Reds). In order to better understand each other, individuals from each setting are chosen by lottery to spend some time with their brain waves overlayed on each other, to fully experience life that they would otherwise scorn.

A barista in a city bar thus finds himself having to spend some weeks as a redneck country boy in Missouri, and he has to do his best to avoid the fact that he has taken over the body of the labourer. It’s not the most subtle of tales, and the action revolves around a kayaking trip down a river in which his identity is finally guessed.

I suppose it makes a change from stories in which the difficulties humans and aliens face in understanding each other are explored. but it doesn’t give a good impression of any of the parties!

A story in which the difficulties humans and aliens face in understanding each other are explored. There are plenty of stories of this ilk, often quite tiresome ones in which the language difficulties are the focus (nb there is a science fact article in the issue that rather neatly suggests that there simply will not be any way for subtle issues of communication being a problem as alien languages are likely to be far too alien to be easily understood.) Here it’s a simpler issue, and one which you would have to think would have been identified very early on : the aliens don’t like things to be perfect, so a perfectly arranged and executed reception for them is an insult. Fortunately this is identified and the problem rectified.

The story so far summation is fun to read, with some redolence of the 1970s soap parody ‘Soap’ with its madcap recap at the beginning of each episode. Confused? You will be!

Plante the pick of the issue for me.